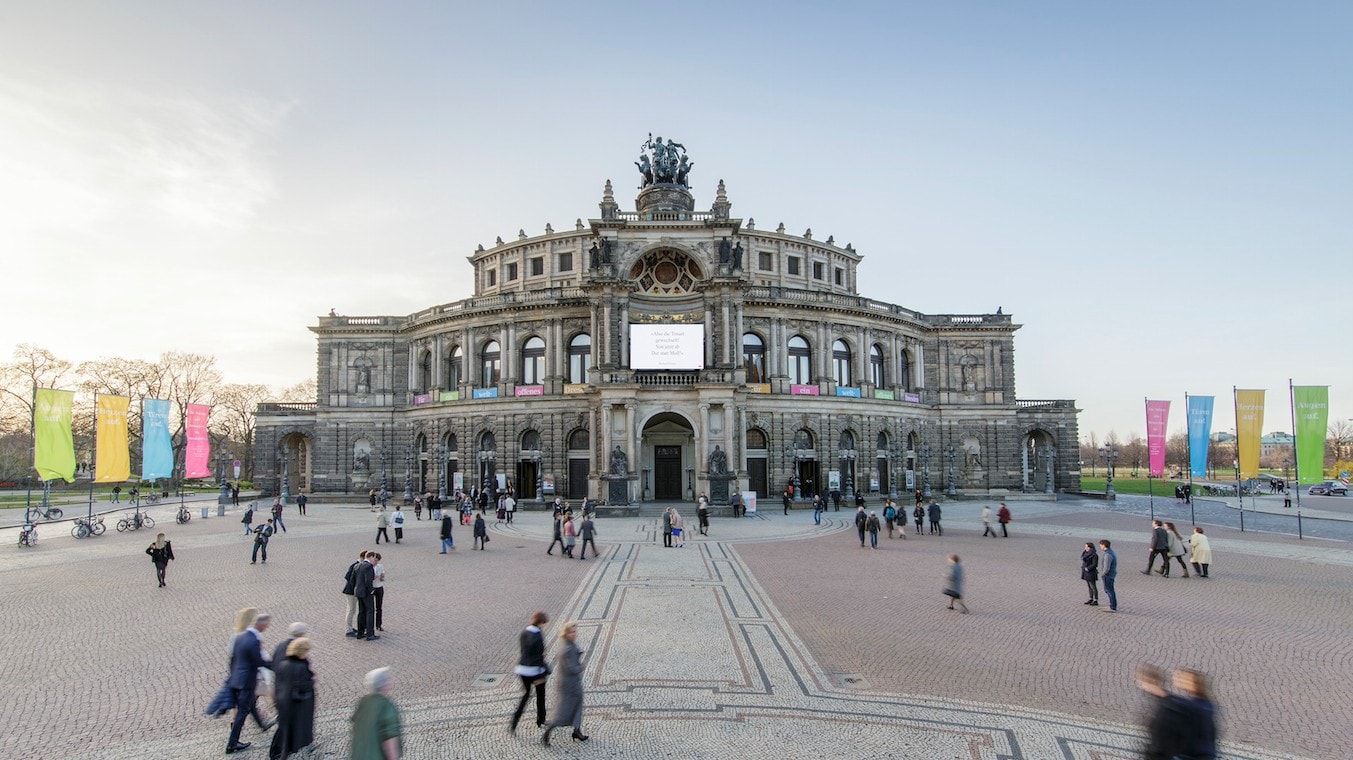 The first Semper Opera House was considered one of the most beautiful theatres in the world. When it burned down in 1869, the citizens of Dresden insisted on having it rebuilt by the same architect, Gottfried Semper. On 2nd February 1878, the reopening took place of the Dresden Opera as we know it today. The star architect had been forced to oversee the project from exile in Switzerland because he was banned from entering Saxony at the time.

Gottfried Semper had not been in the city long before he made his first major career breakthrough. In 1834, at the age of 31, he was appointed Professor of Architecture at the Academy of Fine Arts. Before then, he was mainly known for his work as an art theoretician. It was only when he supervised the construction of the Hoftheater (Royal Court Theatre), as the opera house was officially known, that he gained initial international recognition as an architect.

The spectacular rotunda, which was built between 1838 and 1841 on what is now known as Theaterplatz, was inspired by the style of the early Italian Renaissance. Within a short time, it was lauded around the world as the most beautiful theatre in existence.

Semper was subsequently commissioned with the building of the Dresden Gemäldegalerie, but political events were to intervene. Semper was a supporter of the Dresden Revolution of May 1849, the professed goal of which was the establishment of a Saxon republic and, by implication, the overthrow of King Friedrich August II. Semper had played a key role advising the insurgents on the techniques of barricade construction as the Prussian troops marched on Dresden. He fled Dresden, first seeking refuge in London and then in Zurich.

During this period of exile, he was involved in various projects, including the design of the Burgtheater in Vienna.

In 1869, during his absence from Dresden, a catastrophic fire destroyed the first Semperoper, and because another important theatre, the Great Opera House on the Zwinger, had already burned down during the May Revolution, Dresden suddenly found itself without a venue for the performance of opera.

Less than three months after the fire in the Hoftheater, a replacement had already been erected, the so-called ‘Bretterbude’ (shack). As the name suggests, this could only be an interim solution.

The people of Dresden drew up a petition to King Friedrich August II, humbly beseeching that the expatriate Semper be put in charge of the reconstruction. The monarch assented with the proviso that the ban on him entering the country remained in force. Obliged to revise the plans of the original structure in exile, he assigned management of the construction work to his son Manfred.

The new building took seven years to complete (1871 – 1878). On 2nd February 1878 the Zweites Königliches Hoftheater (Second Royal Court Theatre) was opened with a performance of the Jubelouverture by Carl Maria von Weber and of Iphigenie in Tauris by Johann Wolfgang von Goethe. It stood for the next 67 years until 1945 when it was destroyed during the Allied bombing raid of 13th/14th February.

This time, it took much longer to restore the Semperoper to its previous glory – a full forty years. But on 13th February 1985, the festive reopening took place. This venerable theatre had thus been rebuilt for the third time, and always true to the design of one man.

The most recent reconstruction was entrusted to the architect Wolfgang Hänsch who adhered strictly to Gottfried Semper’s plans, making only the most necessary of changes. For example, he added an administration building and slightly enlarged the auditorium.

Apart from these modifications, however, the Semperoper you see today is a true replica of the original. And it is still incontrovertibly one of the most beautiful opera houses in the world.

The complete Ring Cycle will be performed at the Semperoper once again during the week of Monday 29th January to Sunday 4th February. The staging is by Willy Decker, and the Sächsische Staatskapelle will be conducted by Christian Thielemann. Unfortunately, tickets have sold out for all performances, but you can purchase standing room tickets or – with a bit of luck – even returns at the box office.