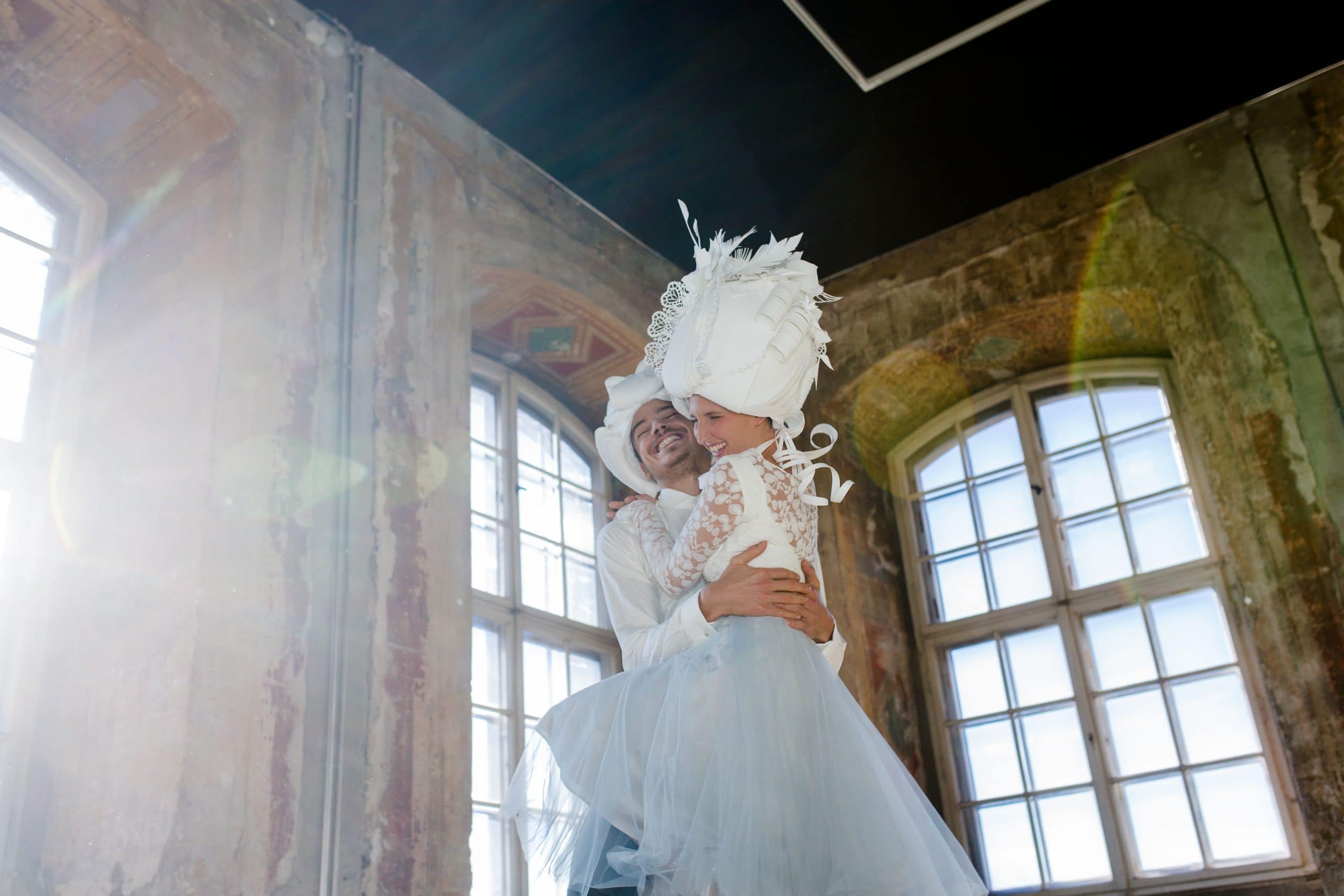 When Friedrich August II married Maria Josepha, daughter of the Austrian Emperor, Dresden celebrated for a whole month. The event had been planned on such a scale as to outdo any wedding party seen before. 300 years later, Saxony is staging a revival of the great occasion and paying homage to the dream couple.

When the nobility get married, it is generally a high-profile public occasion. Take, for example, the recent wedding of Prince Harry and Meghan, the parade through Windsor and Elton John’s performance in their honour.

It was a similar situation in 1719. The exchange of vows was a comparatively low-key affair – Friedrich August II and Maria Josepha had already officially wed in Vienna. However, it had been agreed that the celebrations should take place in Dresden, and that these should outshine anything seen before.

On 31st August, the bridal couple set foot on Saxon soil. Their arrival was an event in itself. The normally sleepy town of Pirna on the banks of the Elbe had been designated as the assembly point for a fleet of river craft, because the ‘baroque jet set’ wished to cover the last stage of the journey by water. A long procession of magnificent gondolas awaited them – the Wettin’s own version of Venice.

This year marks the 300th anniversary of the royal wedding, and many of its features are being recreated. For starters, the water parade Lustgondeln anno 1719 (Pleasure gondolas 1719-style) will be staged on 25th August, and Pirna will be decorated in baroque fashion. The 1719-themed celebrations will get underway on the marketplace at 10am. There will be ongoing dance classes, because this is a key element of a wedding party.

The river parade will be led off by the MS Sächsische Schweiz (‘Saxon Switzerland’) at 2pm. Pride of place in the fleet goes to four replicas of historic gondolas. The Pfauengondel (Peacock Gondola), a particular favourite of Augustus the Strong, and the Venetian gondola have been specially constructed for the wedding anniversary.

The organisers have, of course, taken a few artistic liberties. The gondolas look true to the original, but they do not have to rely on physical strength alone: state-of-the-art electric motors will assist the rowers.

And in any case, the occasion will not be 100% authentic. The monarchy is long gone, and the parade is open to all, i.e. anyone who has a riverworthy vessel can simply tag along behind, with no prior registration required.

At the halfway point is Pillnitz, which will also be decked out as part of the baroque spectacle. And when the parade eventually moors alongside the Dresden Terrassenufer, the party will change to another mode of transportation and proceed through the Old Town to the Zwinger in a convoy of festive carriages. The event will begin to wind down from 6pm, but before that, there will be ample opportunities for revellers to take selfies in baroque costumes.

The Rolls-Royce among carriages

The carriages will process only once through the streets of Dresden, but from 30th August onwards you can find out more about the means of transport used in the 18th century. Von Prunkgondeln, Prachtkutschen und Pferdeäpfeln – Unterwegs zur Jahrhunderthochzeit 1719 (Of gondolas, state carriages and horse manure: En route to the wedding of the century in 1719) is the title of an exhibition which can be visited in the Transport Museum until April 2020.

Of course, the biggest party far and wide had a long guest list. In addition to the thousands of princes, counts and barons together with their entourages, the city was packed with merchants and showmen – plus, of course, an audience from all over the world who did not want to miss out on the baroque entertainments. How did they travel to the venue, what were the various modes of transport, and what sort of infrastructure was put in place for the wedding?

The Transport Museum reconstructs the vehicles that made their way along the bumpy roads of Saxony. The showpieces of the exhibition are the luxury ‘limousines’ of yesteryear: the open carriage of Augustus the Strong is adorned with gold and exudes an aura of wealth. The Grand Carosse with its velvet upholstery carried Maria Josepha. In the atrium of the Transport Museum, the carriages are brought to life by means of augmented reality, a technique that takes visitors back in time to 300 years ago.

Tour of the royal accommodation

Parades on water, parades through the streets – all that’s missing is a ‘Parade Appartment’.

This is the name that was given to the bridal suite prepared by Augustus the Strong for his son and new daughter-in-law within the Residenzschloss in 1719. Everything about the rooms was designed to impress, to flaunt wealth and to enhance the standing of the family among the European nobility. Richly decorated wallpaper, sumptuous furniture, metre-high ceilings – the influence of Versailles is unmistakable.

The rooms did not survive the air raid of February 1945. But now, after ten years of intricate restoration work, they are almost ready to be admired in their original glory. The bed slept on by the royal couple has been faithfully recreated. The festive garments on display are the actual originals. The robes that Augustus the Strong wore for his own coronation and for the wedding of his son are a masterpiece of European textile art.

Public tours of the State Apartment in the Residenzschloss begin on 30th September.

A castle doubles up as a video screen

It wasn’t just the State Apartment in the Residenzschloss that was inspired by the French royal court. Schloss Hubertusburg, the magnificent hunting lodge of the Wettin family, was also considered to be a ‘Saxon Versailles’. Augustus the Strong had it built in 1721 for his son, who subsequently had the country retreat adapted to his own tastes. It even had its own opera house.

But over the centuries, its glory faded. First the Prussians plundered the castle, then it served as a hospital for wounded soldiers and later for psychiatric patients.

The walls are still bare, but the restoration work, timed to coincide with the anniversary, is proceeding apace. There are not one but two special exhibitions bringing the past to life. That’s because the bare walls make a perfect screen for a 360° video installation.

The splendour of the royal court flickers and shimmers once again in Hubertusburg. And the exhibition about the Prince-Elector and his bride is a reminder of how much Friedrich August II and Maria Josepha distinguished themselves through their love of the arts.