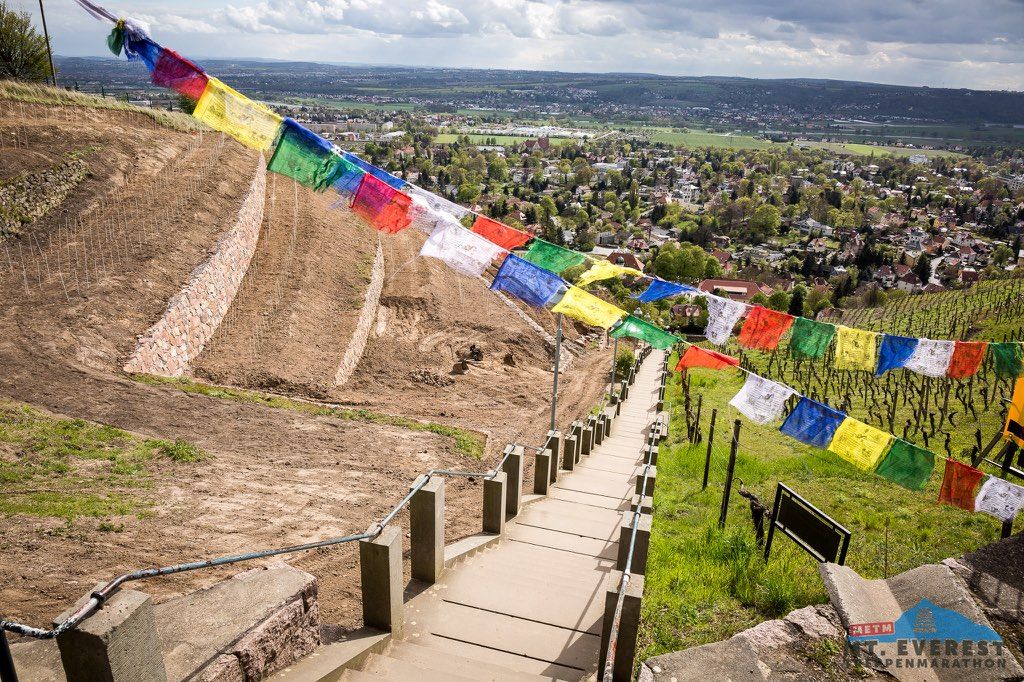 Extreme sports fans have already marked the weekend of 21st - 22nd April in their diary. That’s when endurance runners will be competing in the 14th Saxon Mount Everest Stair Marathon (Sächsischer Mount Everest Treppenmarathon) at Radebeul. It is one of the toughest events of its kind in the world.

With idyllic vineyards instead of rugged Himalayan peaks, there is no likelihood of anyone mistaking the Spitzhaus steps in Radebeul for Mount Everest.

Extreme athletes from all over the world nonetheless descend on Saxony every year for a very special ultra-endurance race. The runners go up and down the side of the hill 100 times – a grand total of 79, 400 steps. The elevation gain is equivalent to ascending Mount Everest. The overall distance of 84.4 kilometres also happens to be the same length as a double marathon.

It sounds like a challenge for which you either have to be a bit crazy or the type of person who lives their life at the limit. But that’s not all: since 2015, the Saxon Mount Everest Stair Marathon has been organised as a 24-hour event. So it no longer ends when all the contestants have completed the 100 ‘laps’. Victory goes to the person who has made the most ascents/descents during that time.

The addictive nature of the extreme

The sheer sense of relief on completing the race is obviously worth all the effort. “Around half of the entrants are repeat offenders,” says organiser Ulf Kühne. “When you’ve done it once, you keep coming back for more.”

Each year, the starting line-up becomes increasingly diverse. Not only extreme athletes, but also long-distance runners and triathletes are attracted by the challenge in the vineyards. 83 solo contestants have already registered for this year. In addition, there are 25 three-member relay teams who will be doing the 100 laps in stints. There are also the so-called ‘tourist teams’ made up of 50 runners each doing one lap, which amounts to half the full distance.

The number of contestants has already reached the limit. There is a two-way traffic – and the Spitzhaus steps are only just over a metre wide.

Almost half make it to the top

In addition to the crowded field, the weather can also severely wear down resilience. Because unlike most other stair races, the one at Radebeul is completely outdoors, meaning that contestants are subject to rain, wind and even freezing showers.

Anyone who reaches the virtual summit (around the 100-lap mark) under such gruelling conditions has every right to feel proud of themselves. According to Ulf Kühne, almost half of the solo runners accomplish that. Each of them gets a medal, and the one who completes the distance in the fastest time wins a special trophy.

Ulf Kühne has a few tips for anyone intending to make it to the summit, lift the winner’s trophy or even set a new record. This seasoned athlete has run the stair marathon himself several times and offers the following advice: “If you are serious, you should already have started your training at the beginning of the year.” But in the final 14 days before the event, put your feet up!