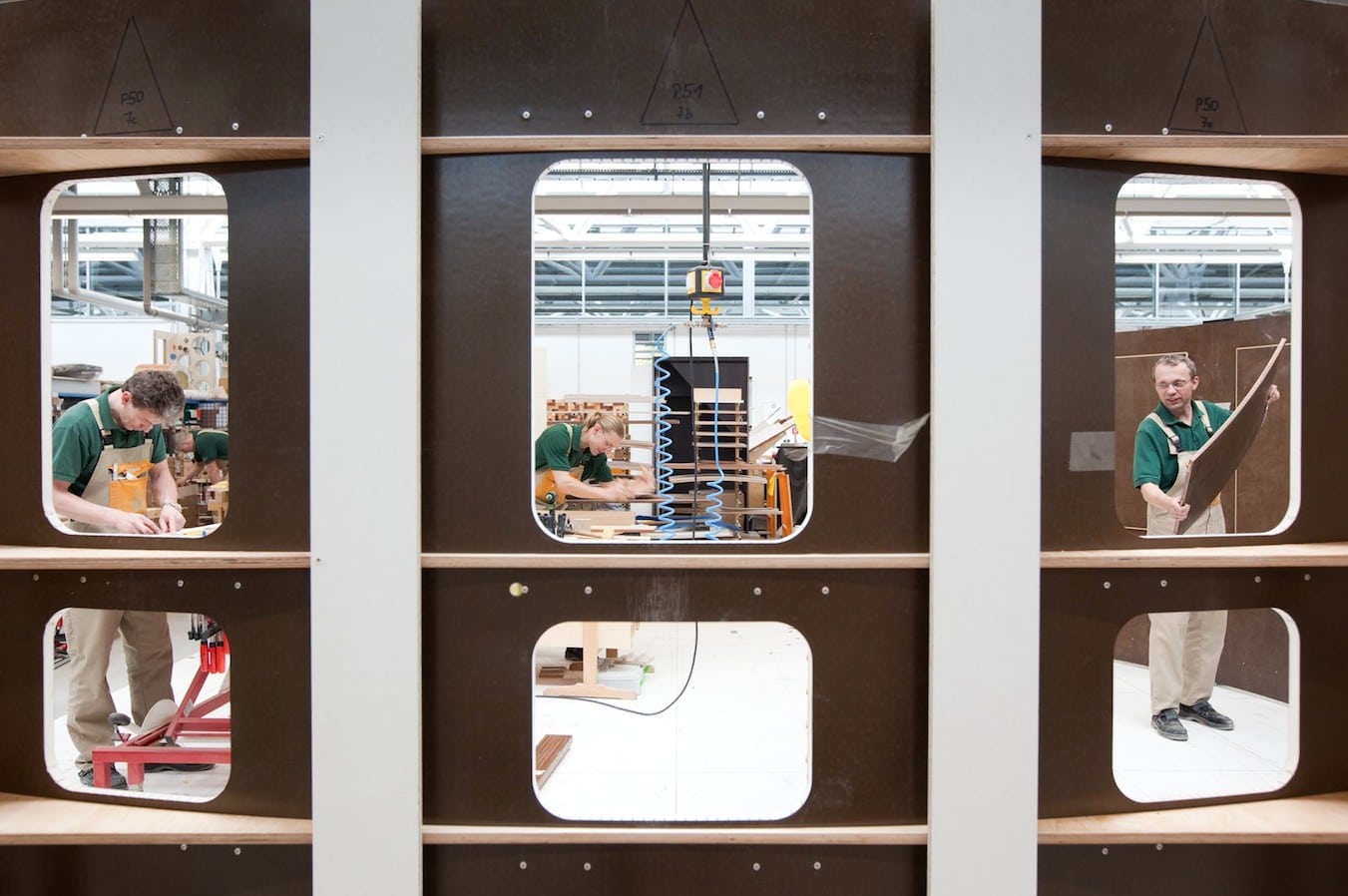 If you are to remain faithful to yourself, you must be open to change. The eventful history of Deutsche Werkstätten Hellerau in Dresden serves as a prime example of this principle

When Fritz Straub took over Deutsche Werkstätten (literally German Workshops) in 1992, this tradition-steeped company had an illustrious history, a highly skilled workforce – and no customers. The furniture produced by Deutsche Werkstätten, which had been so sought after during the GDR era, was now shunned by consumers. This was despite the fact that the company, founded in 1898, had achieved iconic status in the history of design and manufacturing. But after reunification, it was unable to compete against international
furniture manufacturers who benefited from economies of scale.

The fact that 200 craftsmen, designers and interior architects are now employed at the company’s Dresden headquarters is something of a minor miracle. Fifty further employees in Russia, the UK, France, Switzerland, the USA, Asia and the United Arab Emirates are busy creating a stable basis for sales. What was initially seen as a problem child has now become a highly innovative medium-sized company.

The route it has taken is the story of a company that has remained true to its history while reinventing itself at the same time.

Fritz Straub, who took over as managing director and chief investor, was a newcomer with no previous knowledge of the furniture industry. When he came to Dresden in 1992, he wanted to start something new. It turned into a great adventure, a learning process for the entire company that continues to this day a quarter of a century later.

Today, Deutsche Werkstätten specialises in handcrafted, ambitiously conceived bespoke projects, for example the interiors of luxury yachts. A further line of business is the interior furnishing of privately owned villas and palaces, some of which have several thousand square metres of floor space. Customers, who are discerning in every respect, include billionaires, oligarchs and potentates from the Arab world, but also German entrepreneurial families.

“We do not usually negotiate with the individual concerned but rather with a complete entourage,” explains Straub. “As a rule, the customer selects a renowned designer. We are then a service provider operating in the background.”

None of this was foreseeable when he took over the company. The aspect that initially drew him to Deutsche Werkstätten was a small department within the company that employed some of the finest craftsmen in the GDR. Their area of expertise was the interior furnishing of prestigious buildings such as the Semperoper. Straub’s first decision was to move out of mass furniture production. The core business of the new company was to be interior design.

In order to have at least one reference project in his portfolio, Straub underbid his competitors in the tendering process for the construction of an acoustic wall in the Saxon state parliament in 1993. He did this in the full knowledge that the contract would leave him with a deficit of DM 100,000. But also in the knowledge that it would earn him recognition in the professional world and the opportunity to tender for further commissions.

Change is the only constant

Yacht building now accounts for a large proportion of revenue at Deutsche Werkstätten, yet the company’s entry into this particular  market was fortuitous. In the late 1990s, it was commissioned by the national rail network, Deutsche Bahn, to kit out the interior of the Metropolitan Express Train. It was conceived as the luxury variant of the new ICE 3.

The team in Dresden developed high-strength veneered board and a new surface treatment. The ICE lounge-style carriages had to dampen vibrations, comply with fire protection standards and withstand rapid acceleration. Two of the luxury ICEs were delivered. Then the financial officers at DB vetoed series production and the Metropolitan project was abandoned.

The ICE episode put the company in the red, but in the process, they had considerably enhanced their expertise. The next logical step was therefore to branch out into luxury interiors for mobile structures. There is no more demanding and cost-intensive challenge in interior design than that presented by a luxury yacht. Deutsche Werkstätten fought to establish itself in a niche market that it has now made its own.

Despite stringent fire protection regulations, many customers and the designers who work for them specify wood surfaces, which creates technical challenges. The yacht specialists from Hellerau work together with researchers at TU Dresden on the development of new fire-resistant materials. Millimetre-thin veneers, bent into complex shapes, treated with highgloss lacquers, a 360-degree rotatable bed, bathrooms with precious wood veneer, marble and onyx surfaces are among the less extravagant choices.

One of the most expensive commissions for the interior of a single yacht amounted to 23 million euros. Another celebrity customer wanted a complete professional recording studio installed, which was to remain fully functional even when the yacht was going at top speed. That was clearly one job that was not without its technical complications.

“We make our living from doing things that other people can’t,” says Straub. “And if we’re not already able to do them, we learn how.”