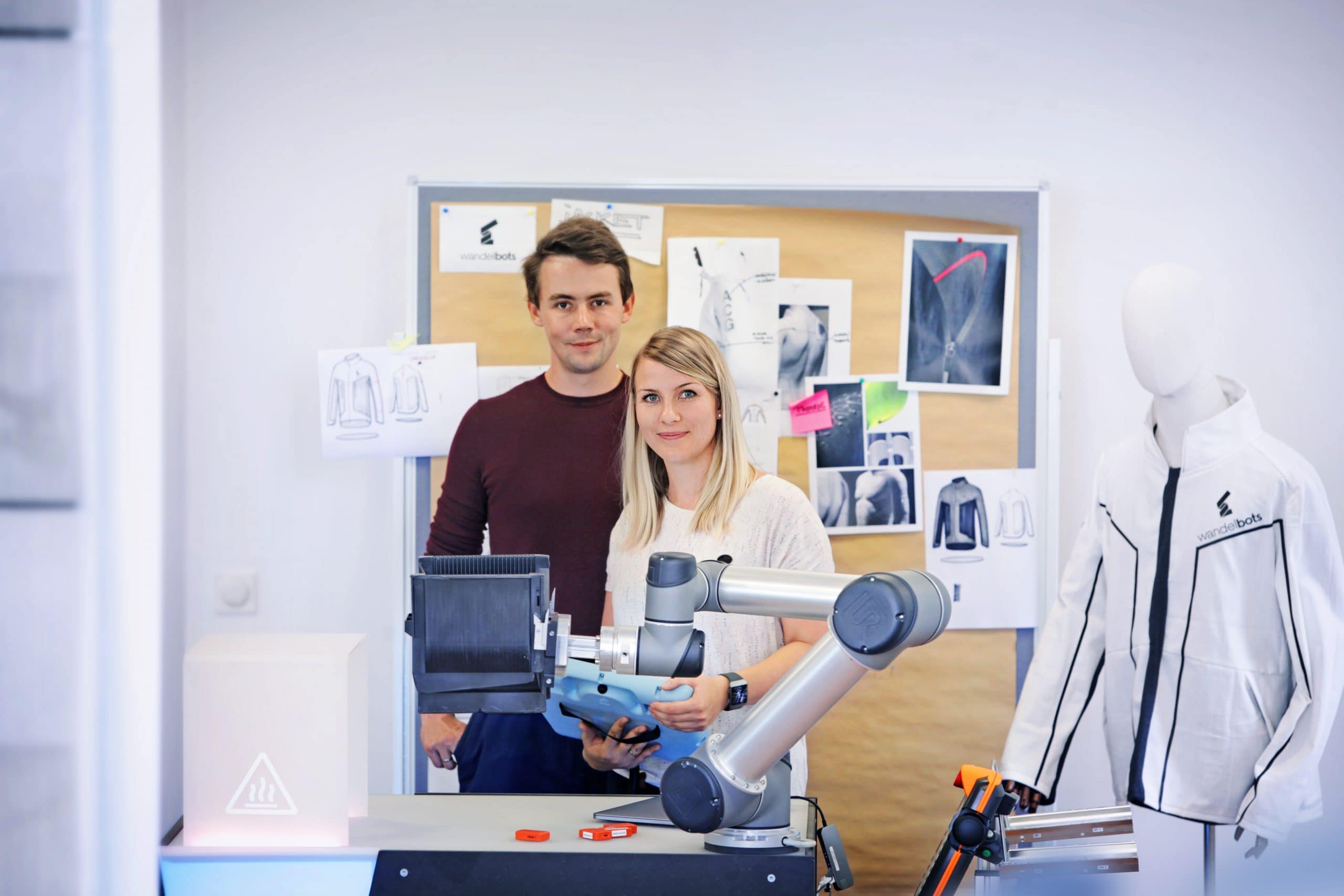 The office space in a basement near the TU Dresden campus is somewhat cramped. The desks have had to be moved closer together on several occasions to cater for the arrival of new staff. The company is barely a year old but has already outgrown its premises. But that’s par for the course when you are at the cutting edge of technology. “It’s amazing what’s happening,” says Christian Piechnick. He and his wife Maria are two of the six founders of Wandelbots. “I almost can’t get my head around it – there’s just too much going on.” If Professor Frank Fitzek, Head of the Deutsche Telekom Chair of Communication Networks at TU Dresden, has assessed the situation correctly, they are just at the beginning. Fitzek is one of the leading innovators in the field of digital communication – and a co-founder of the start-up. “This idea not only could change the world,” he says. “It most certainly will.”

Millions of euros are currently being spent on research into Artificial Intelligence (AI). More specifically, into how machines can be induced to learn. AI is set to have a major bearing on our future. The problem, however, is applicability. Primarily because only very large companies can afford such technologies.

A mission rather than a vision

The Wandelbots research team have found just the right solution for this problem: they have developed a system and software for teaching machines to perform certain tasks and processes. For example, fitting a car window. Or assisting a baker in making bread rolls. Christian Piechnick can conceive of many more areas in which this innovative approach could work:

“The tools that have so far been designed for the programming of robots are mainly intended for specially trained professionals. But with our system, we also want to make such technologies accessible to medium-sized companies such as a bakery.” This is their vision, though ‘vision’ doesn’t quite capture the essence. “We see it more as a mission,” says Maria Piechnick.

The thirty-something couple do not look anything like the usual caricatures of a nerd. Instead, they look like poster models for the young, bright start-up generation. He speaks quickly, jumping from one thought to the next, while she is reserved, almost shy. Both studied Media Informatics at TU Dresden. After graduating in 2012, they stayed on as research associates – in an environment that spurred them on to try new things and also to embark on an unconventional route.

“We spent a lot of time on self-adaptive systems, in other words software that is able to adapt to changing environments,” explains Christian Piechnick. “This had become a highly relevant issue, as the programming of robots is still very complicated and expensive. For a long time, there were no real transfer tools, not even for business.“

It started with an ordinary jacket

A robot that was available for use by students in their department was the perfect test object. How could it be trained? Maria Piechnick had the core idea: ‘intelligent clothing’ equipped with sensors – as a kind of technical bridge that transmits movements to the robot, which it then learns and repeats. In the initial stage, they experimented with an ordinary jacket that Maria Piechnick brought from home. “We started remote-controlling robots with our own body movements,” she says. “It was reasonably straightforward in the beginning, but the technique has been constantly evolving.

”We have good arguments in favour of Dresden. The city is a major hub of research and development. There are great networks here, as well as people we work with and from whom we benefit.

In 2016, Wandelbots gave a first public demonstration of the project at the Hannover Trade Fair. Since then, the interest has been enormous. Investors have contacted them, and companies from the engineering and automotive sectors have expressed an interest in placing orders. They are already working in collaboration with the Volkswagen Group and telecoms provider Ericsson, as well as with a major Chinese appliance manufacturer. The two researchers had actually wanted to continue with their doctoral studies but have now put these on hold. “It was just the perfect time to start a business,” says Maria Piechnick. That was at the end of 2017. Today, Wandelbots employs 16 people. They have received applicants from would-be colleagues in Russia, China and Switzerland. “These are people who could work anywhere, but they are interested in us,” says Christian Piechnick proudly. “That’s a great feeling.”

Wandelbots and Dresden belong together

When the company was founded, the researchers issued a manifesto. One principle to which all the founders committed themselves was that Dresden would remain the base of operations. Their biggest investor, Atlantic Labs, would apparently have been quite happy for them to move to Berlin. “But we have good arguments in favour of Dresden,” says Maria Piechnick. “The city is a major hub of research and development. There are great networks here, as well as people we work with and from whom we benefit.”

The team have access to an extensive scientific network. This includes university institutes and affiliated research laboratories specialising in the field. In addition, Dresden has one of the biggest concentrations of microelectronics manufacturers in Europe. Wandelbots received 90,000 euros for a collaborative venture with the Dresden University of Applied Sciences (HTW). The grant came from a new innovation fund, with which the Free State’s capital city is promoting technologies of the future. Support has also come from the State Chancellery of Saxony and regional entrepreneurial communities such as Business Angels.

Frank Fitzek, Head of the Deutsche Telekom Chair of Communication Networks at TU Dresden, is giving help and guidance to the founders of the Wandelbots. One of Fitzek’s roles is as spokesperson for the Centre for Tactile Internet with Human-in-the-Loop (CeTI) at TU Dresden. CeTI, which became one of three ‘Clusters of Excellence’ at the Technical University in autumn of last year, is looking for ways to promote collaboration between man and machine. For this purpose, scientists from the fields of electrical and communications engineering, computer science, psychology, neurosciences and medicine are working together with researchers from the Technical University of Munich, the German Aerospace Centre and the Fraunhofer Society as well as various international scientific institutions. At Wandelbots, Fitzek operates in the background as a mentor and networker.

What does it take to be successful with such a new venture? Money – and good people.

He recognised the potential of intelligent clothing at a very early stage: “Good ideas are always simple. Most people have opted for cameras, for optical systems. But they are susceptible to errors.” He believes that the concept developed in Dresden caught on because it was different and not overcomplicated. In addition, there is scope for it to be used directly in many areas of the economy. This is the strategic advantage that Wandelbots has in the research field of Artificial Intelligence, in which scientists and technology giants from all around the world are currently competing.

In the circles of talent

“The Wandelbots system has a huge impact on time and cost. Furthermore, companies can also use it to teach a robot for small batch processing. It is not only suitable for mass production lines but also for medium-sized companies.” Frank Fitzek’s network includes colleagues all around the world. He is nonetheless convinced that Dresden provides the ideal location for the start-up, at least for the near future: “What does it take to be successful with such a new venture? Money – and good people. And here in Dresden, we can hire them more speedily and conveniently than elsewhere, because we move in the same circles of talent.”

Frank Fitzek keeps in touch with the founders, advising them on decisions and accompanying them to important appointments. The diary of the Wandelbots team is exceptionally busy. They do not know where they will be a year or two from now. “One year ago, we were sitting together thinking about the name of our company,” says Maria Piechnick. “At that time, we were not able to foresee what would become of our idea.”

Will they finish their doctorate at some point? The founders shrug their shoulders: “Let’s see if we have enough time on our hands in the next few years.” At the moment, it rather looks as if they won’t.