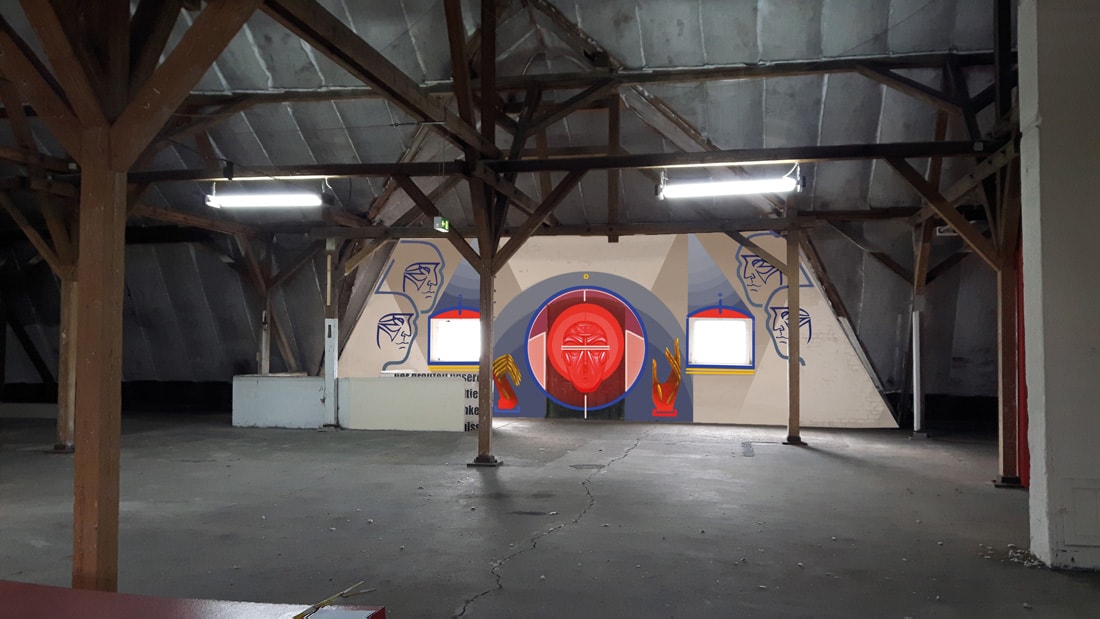 With its roots in the East and its youthful perspective on the world, the Ostrale fills a broad canvas. 164 artists from 25 different countries populate 8,000 square metres with their works.

Impressive variety unfolds around every corner of the otherwise stark exhibition space. A ceiling-high rocket made of carpet stands next to an equally tall robot, also made of carpet – they are both the creation of Ukrainian artist Sergey Grigoryan. Mark Swysen from Belgium has a rickety shopping trolley stoically ramming into empty metal shelves. In Igor Pereklita’s painting Welcome to Europe, the mythical figure of Europa is depicted as a nude blonde reclining lasciviously on a bull. There are numerous other clever allusions to be found in the entries for this year’s Ostrale which has adopted ‘re_form’ as its unifying theme. Here in the former hay storage area of the old cattle pens, the festival is predominantly young, brash, stimulating and a lot of fun.

The origins of this unique exhibition of contemporary art go back eleven years. In search of a location for art, performance and dance, Andrea Hilger and Mike Solomo came across the old slaughterhouse in the Ostra-Gehege area of the city. Built in 1910 as a major municipal facility, it was closed in 1955. Hilger is still the artistic director of the Ostrale. Over the years, she and her colleagues have worked within the constraints and opportunities of the circumstances (i.e. zero funding but plenty of space, no support from the authorities but a strong network of contacts around the world) to fashion a concept that brings art in a refreshing multiplicity of forms to Dresden. So much so that the Ostrale has since justifiably earned itself the designation ‘documenta of the East’. Inclusive of Eastern Europe and the Middle East, of the art scene between Dresden and Leipzig and of the younger generation of artists yet to make a gallery breakthrough. And this year inclusive also of the old.

For example, the long-established Dresden sculptor Peter Makolis who, for his most recent project Schädel, has chiselled and polished ordinary fieldstone to make a prehistoric ancestral gallery of skulls such as might be found in an archaeological museum. At this point it becomes clear that the five large halls are following some sort of dramatic script: right next to the stones hang Hanif Lehmann’s prints of ossuaries, and on the floor is Kay Kaul’s circular video projection showing the earth from the perspective of a space traveller. This is evidently the starting point for creation and for the Ostrale too: space, earth, man, art.

And then, of course, religion comes along. Franciszek Orlowski silences Poznan’s bell with a cloth wrapped around its clapper, which serves to accentuate the squeaking sound of the bell yoke and of the entire church tower. Sergii Redkevych uses a door and two windows to structure his graffiti of a Jesus icon – or should we call it a mural at the point where it becomes a sacred representation?

The extent to which religion, identity, war, the future and new forms of government determine life in Eastern Europe emerges clearly from the art in each of these themed exhibition spaces. Colourful, larger than life, brash and yet reserved, it bears witness to the quest for a sense of place in the world, for roots and for the future. Just like the Ostrale itself, because this is its first year as a biennial. Next year, the festival will travel to the Maltese capital of Valletta and in 2019 will occupy other exhibition spaces, as the cattle pens are in urgent need of refurbishment.