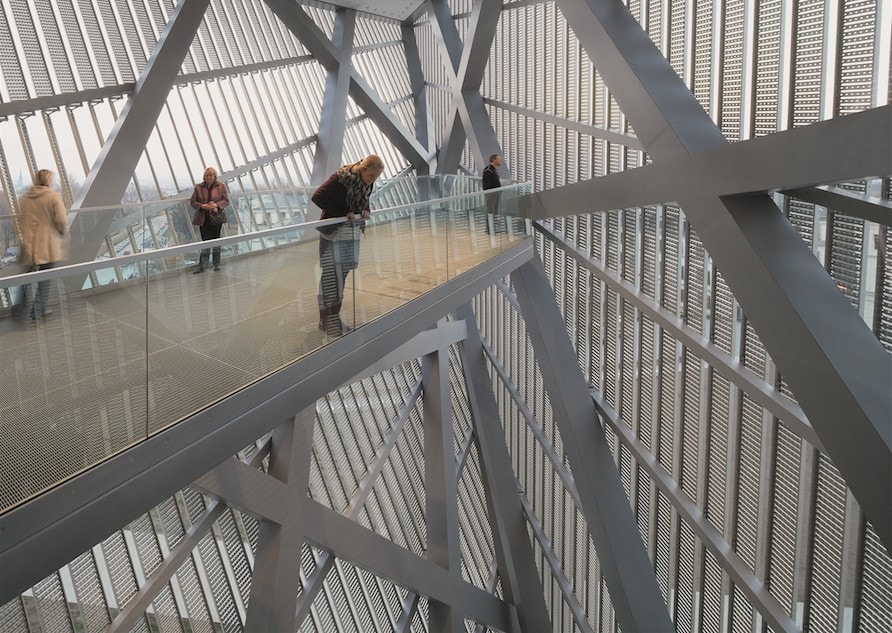 Peace is a precious but fragile commodity. Dresden is all too aware of this – which makes it eminently suited as a location for the Military History Museum of the Bundeswehr.

From this lofty perspective, wartime is invoked again. Below, nothing but free fall; above, the sky once turned black by bomber aircraft. The view is obscured by metal struts which trace the trajectory of the explosive and incendiary devices as they rained down on the city. There are no right angles and no true horizontals or verticals, and the light casts harsh shadows.

Up here, in the wedge which Daniel Libeskind has driven through the Military History Museum, certainties evaporate, safety becomes precarious and the proximity of violence becomes tangible. The apex of the Libeskind wedge points towards Ostragehege park, which was the first district in Dresden to be hit during the air raids of 13th February 1945.

Seen from outside the 140-tonne mass of steel, glass and concrete itself seems like an act of violence that has been perpetrated on the classic architecture of the museum façade – a break with tradition that was deliberate on the part of architect Libeskind.

Because military history is still the key to understanding the function of the building and, since it reopened in 2011, military equipment is still on display. But today the museum is primarily concerned with the destruction wrought by war and the inhumanity of man to man.

It would be hard to find another location in Germany more appropriate for exploring the effects of conflict than Dresden’s Military History Museum.

The building itself was constructed between 1873 and 1877 as the arsenal for the 20,000 soldiers of the Saxon army stationed in Dresden. Not long after, it became a place where weapons were collected and displayed. On a tour of the modern museum, visitors will see exhibits ranging from medieval halberds and suits of armour to a V2 rocket.

It would also be hard to identify a city that more effectively conveys the cynical absurdity of war than the one in which the museum is located.

The air raids, in which large parts of the city were destroyed, continue to haunt Dresden, a collective trauma that is mentally reprocessed every February on the anniversary of the devastating attacks.

Debate on the subject arouses strong passions, for example the decision to rebuild the Frauenkirche from the gaping ruins that had so long stood as a monument to the destruction inflicted on the city in World War Two, and more recently (February – April 2017) the art installation on Neumarkt consisting of three buses standing on end and symbolising the victims of the Syrian civil war. Sometimes these discussions are conducted with ruthless frankness. When Mayor Dirk Hilbert remarked in his speech commemorating the 2016 anniversary that Dresden was not only a victim of war but also “not innocent as a city”, he received threats of such an alarming nature from the right-wing extremists who stage their march through the city centre each 13th February that he had to be put under police protection.

These discussions are also played out in the major cultural institutions such as the Semperoper, which has planned its 2017/18 season around the theme of ‘Brüchiger Frieden’ (the fragility of peace).

In Dresden, the experience of 20th century violence manifests itself expressly in aerial bombing. Maybe that is why the questions raised by war are discussed more intensively here than elsewhere.

Military History Museum of the Bundeswehr

The Military History Museum in Dresden ranks alongside the Deutsches Historisches Museum in Berlin, the Haus der Geschichte in Bonn and the Germanisches Nationalmuseum in Nuremberg as one of the four main museums in Germany dealing with the history of the country.

Not only has the world-famous Semperoper taken the ‘Fragility of Peace’ as its theme for the current season, it also serves as the venue for the presentation of the prestig- ious annual Dresden Peace Prize.