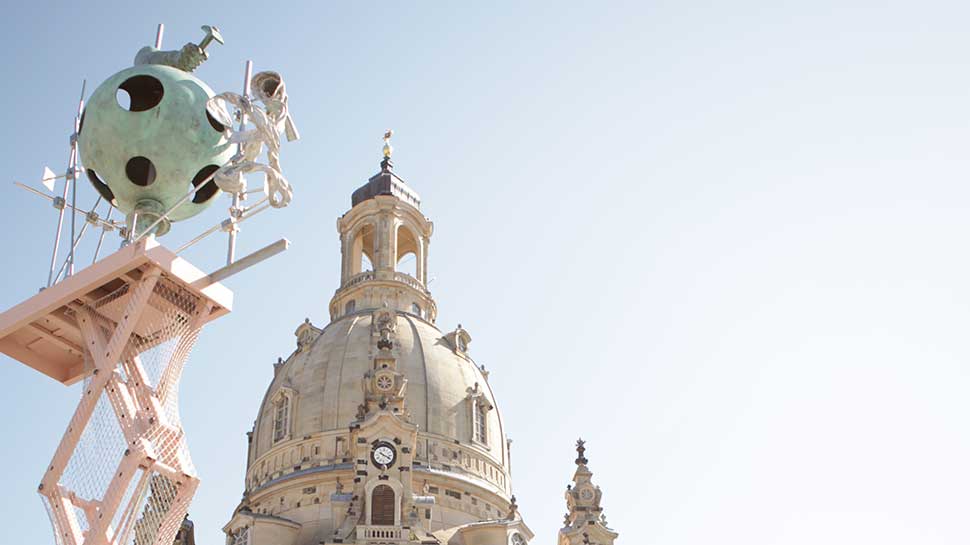 Neumarkt in Dresden acts as a magnet for contemporary art. The Hamburg-based artist duo of Heike Mutter and Ulrich Genth specifically chose it for their installation Denkmal für den permanenten Neuanfang (Monument for a permanent new beginning). Since the end of April, this work has been a feature of the much-frequented open space in front of the Frauenkirche.

At 7.5 metres in height, Denkmal für den permanenten Neuanfang by Heike Mutter and Ulrich Genth is relatively small by comparison with some of the other recent installations that have gone on display on Dresden’s Neumarkt. Indeed, you could almost miss it, as it is dwarfed by three cranes on the adjacent construction site. But in the company of the classic blackened bronze monuments commemorating Friedrich August II and Martin Luther, this interloper looks unusually colourful. Perched on top of a pink hydraulic platform, stainless steel struts support fragments of Dresden’s cultural heritage: the turquoise green arm wielding a hammer is modelled on the statue in front of the town hall depicting a woman sorting through the rubble at the end of the war. At random intervals, the arm strikes a sphere, also turquoise in colour, the shape of which the artists borrowed from an objet d’art in the Green Vault crafted from ivory and likewise perforated. Billowing around this creation is a veil cast from aluminium, reproducing a section of the Three Graces statue at the Mozart fountain in Bürgerwiese park.

The backdrop to all of this is the Frauenkirche. It is now ten years since the church was consecrated, and in the intervening years, the project to restore the Neumarkt to its former glory has got closer and closer to completion. The façades of the baroque town houses, which were destroyed along with the church in the war, are being rebuilt one by one. The reconstruction process has been marked by ongoing debate – modern building standards versus historic authenticity, public space versus property rights – and all the while, the square has been establishing itself as a favoured stage for contemporary art. In March 2016, Rainer Opolka exhibited Die Wölfe sind zurück (The wolves are back), with bronze wolves symbolising those who would destroy democracy. Monument, fashioned by German-Syrian artist Manaf Halbouni from three vertical buses, has just been dismantled.

Denkmal für den permanenten Neuanfang is now due to occupy the spot for the next two years. Genth and Mutter deliberately chose this location on Neumarkt. They have a track record for selecting public places in which to reference a city’s history with their sometimes ironic and sometimes provocative but always complex installations. Dresden is often accused of being obsessed with its own image. In Denkmal für den permanenten Neuanfang, this image has now been subjected to scrutiny from outside.

Behind the project to restore the baroque façades of the Neumarkt project, these two artists sense a conflict between the desire of local people to defend their urban space and the type of architecture favoured by business interests looking for return on investment. And there was something else they saw: “According to our research in Dresden, there is not a single woman apart from Clara Zetkin to whom a monument has been dedicated,” says Genth. The veil and disembodied arm are a reminder of the visible role played by women in the city. “The sphere, on the other hand, stands for perfection,” adds Genth. “It stands for the perfected form, for symbols of power ranging from the globe to the imperial orb, as well as for the pursuit of wholeness. Of all the items in the Green Vault, these spheres immediately fired my imagination, because they have absolutely no decorative function. Although they are from the 16th century, they come across as very modern.

Of all the items in the Green Vault, these spheres immediately fired my imagination, because they have absolutely no decorative function. Although they are from the 16th century, they come across as very modern.

Genth and Mutter ignored the baroque connection – Dresden is famous enough for that anyway. There were new beginnings before and after that period. Nowhere else is this more apparent than on the newly restored Neumarkt with the recently reopened Kulturpalast (Palace of Culture) on the fringe. In two years’ time, when the cranes on the last construction site are replaced by a tree-lined boulevard, this latest monument will also make way for something new.

And if you pay it a visit before then, you may be lucky enough to hear the hammer strike the sphere.