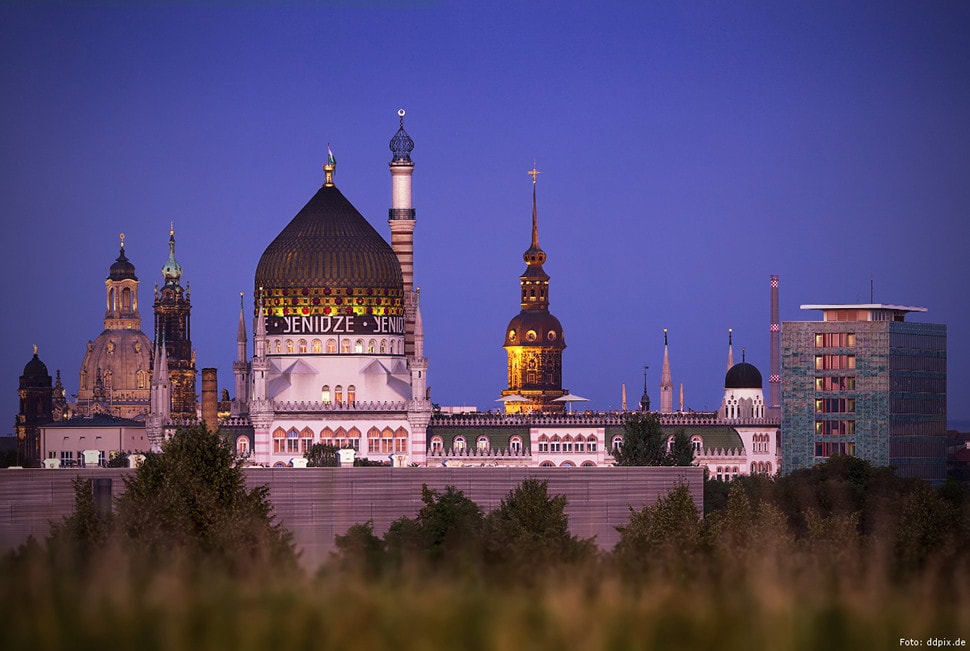 HOME CULTURE ELBFLORENZ We Dresdeners are proud of our city, and we are proud to be Dresdeners. So it may come as a surprise that, when we stress the unique beauty of this city, we describe it in second-hand terms as ‘Florence on the Elbe’. But leaving all gushing glorification to one side, it is influences from other cultures that have shaped and continue to shape our city. By Jens Wonneberger

Since Herder first coined the description ‘German Florence’ and Kleist waxed lyrical about ‘Italian skies’, Dresdeners have liked to imagine their city as located somewhere vaguely south of the Alps. The fact that Kleist never managed to get as far as Italy is of little consequence, because the Dresdeners know what they have thanks to the Italians who came to the city. The builders of the Catholic Cathedral and the Belvedere, for example, who lived in their ‘Italian village’ on the Elbe, or the artists and craftsmen who decorated the facade of the castle, and not least the actors, singers and musicians. And if they were unable to make their own way here, then they were ‘acquired’, for example the Sistine Madonna, who became the jewel of the Old Masters Picture Gallery in Dresden.

But many locals did indeed travel from Dresden to the fabled places in the Mediterranean area to discover how architects, authors and painters had plied their trade for generations. Perhaps most notably Johann Joachim Winckelmann who toured Italy in the company of his Italian physician and raised art history and archaeology to a new level. For it was not just the buildings and images that connected Dresden and Italy, it was the spirit, the perception of beauty. Dresden and Italy – it was a love affair. And it is no coincidence that, in order to emphasise the beauty of their city, Dresdeners point you to the panoramic views painted by an Italian master, Canaletto.

If you would like an idea of how Dresden and its surroundings used to look, there have been many foreign artists who have captured it picture perfect, for example Anton Graff and Adrian Zingg, both from Switzerland, and later Austria’s Oskar Kokoschka. Their contemporary successor is a Viennese artist with an Iranian background, Yadegar Asisi, creator of the Panometer. Or you can travel back through the medium of literature with Danish fairy-tale writer Hans-Christian Andersen to Saxony’s Elbe Sandstone Mountains (which also go by the enigmatic name of ‘Saxon Switzerland’).

Not only first confectioners came from Switzerland. It was also a Swiss who, at the beginning of the last century, introduced modern dance. The educational institution founded by Emile Jaques-Dalcroze in the Hellerau Garden City and the dancers who performed there, such as Mary Wigman and Gret Palucca, established his international reputation. Hellerau was where French poet and dramatist Paul Claudel built up a following, where Scottish educator and author A.S. Neill trialled his pedagogical reforms, and where Austria’s Jakob Hegner set up his publishing house. Hellerau became the ‘Bayreuth of the North’. Appropriately, the original Bayreuth in Bavaria owes its reputation to a son of Saxony – Richard Wagner.

In 1848, when Wagner was manning the barricades in Dresden as a young revolutionary, the chief firebrand was the anarchist Bakunin. He was, however, not the only Russian who sought to change Dresden. When Prince Repnin-Volkonsky took up residence in Dresden after the withdrawal of French troops in 1813, he not only reorganised economic and political life in the city but also expanded the Art Academy, nationalised the Royal Chapel, laid out the Grosser Garten and opened it as a public park. He also had the flight of steps built to Brühl’s Terrace, creating a vantage point worthy of the name ‘Balcony of Europe’.

Another Russian, Prince Putyatin, is still remembered in Dresden as an eccentric personality. The writer Dostoevsky led a much more withdrawn life in Dresden, wrestled with his inner demons and gave the city yet another picturesque description – ‘a treasure in a tobacco box’.

The connection between tobacco and Dresden is another story, and one that has a highly visible presence in our own time: the Yenidze, a prominent feature on the city’s skyline, looks like a mosque but is in fact a former tobacco factory.

The Orient, the foreign and the exotic have always coexisted harmoniously in Dresden. The Royal Household of the Grand Mogul was recreated on a somewhat smaller scale but no less richly decorated and is now one of the main attractions of the Green Vault.

For their various collections, the prince electors not only accumulated treasures and paintings, but also items of porcelain from China and Japan. Augustus the Strong actually contemplated having a throne made of porcelain and had the Japanese Palacebuilt to house it where visitors can now also admire an entire room fitted out with furnishings from Damascus. Dreams of the exotic also took shape in the Pillnitz Summer Palace with its chinoiserie-style roofs, Chinese pavilion and Chinese lilac bushes, and with its Dutch and English gardens. Pillnitz is also home to one of the oldest Japanese camellias in Europe. For the past 230 years, this plant has been bursting into bloom each spring, producing anything up to 35,000 red flowers.

A hundred years after the elector Frederick Augustus I of Saxony was crowned King of Poland in 1697, Polish exiles came to Saxony in their thousands. Many of them settled permanently, including Adam Mieckiewicz who wrote Dresdner Totenfeier, a work that epitomises Polish national sentiment. Another giant of Polish literature, Józef Ignacy Kraszewski, bequeathed to the people of Saxony a trilogy telling them of their own history; his home in Dresden is today a museum.

From the north came Gjellerup, a winner of the Nobel Prize for Literature, from Denmark Andersen-Nexö and from Norway the internationally famous dramatist Ibsen. The Austrians seemed to have a monopoly on ironic observation – no wonder, as the legendary court jester Frohlich came from the Salzkammergut region. Later, Franz Grillparzer gently mocked the local dialect, though that did not stop Austrian composer Richard Strauss from premiering some of his operas in Dresden, with fellow Austrian Ernst Schuch conducting the orchestra.

What would Dresden be without these influences, for which the term ‘foreign’ has long since lost any relevance? It would not be ‘Florence on the Elbe’, maybe not even Dresden, because that name originates from the Slavonic language Sorbian. Visitors arriving in Dresden today, perhaps stepping out of a train at the main station with its bold roof designed by British star architect Norman Foster, find themselves in a multi-ethnic city, made all the more so by the many foreign students at the universities and the staff employed at the numerous scientific institutes.