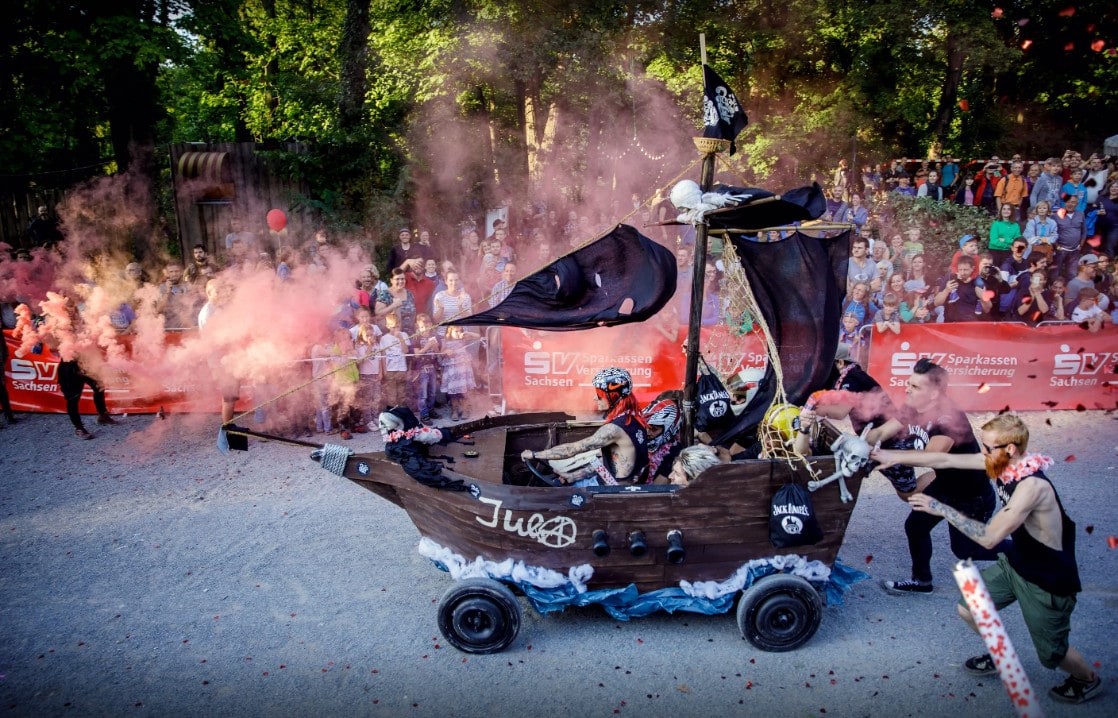 The metallic rattle of rims on cobblestones is getting louder, and eventually the pirate ship whizzes around the corner to the delight of the cheering fans by the roadside. It’s that time of year again when contestants wheel out their makeshift vehicles to enter the Saloppe soapbox race.

The absolutely crazy Saloppe soapbox race… Every summer, the popular Saloppe beer garden hosts car racing of a very different kind. The event actually had its 18th ‘birthday’ this year, but it steadfastly refuses to grow up. A crowd of around 6,000 people followed the daredevil descents of the foolhardy crews in their self-built racing crates on the Saloppe approach road. There were eleven teams battling for the Prix de Saloppe this time, but as always, there could only be one winner. The 2018 event was blessed by perfect weather, and neither the drivers nor the spectators will forget this one in a hurry.

The teams spend many months working on the design and construction of their vehicles which may not be propelled by any sort of engine or motor. It’s all down to muscle power. The components may be made of any material the teams like as long as the safety of driver and passengers is assured.

The track on which the race is contested is characterised by twists and turns. Over the years, it has come to be known as the Höllenhang (Hell Slope). The starting line is a four-metre ramp which allows the teams to build up enough momentum to tackle the 800-metre descent to the banks of the Elbe. After a right-hander and two left-handers, the toughest part is over. The teams fight for every tenth of a second. It is steep, and the hairpin bends call for extreme concentration and a good deal of courage. No wonder the drivers have such a frazzled look on their faces. But it’s all part of the fun – including spectacular crashes.

The Prix de Saloppe attracts not only racing fans and DIY enthusiasts; it is also one big party with original ideas and unusual prizes. This year, the Rosis Sailors team secured the John Mehnert Special Effect Privateers Award with a fireworks show. The Audience Entertainment World Championship title as well as the cup for the overall winners went to the Wild Waikiki Waterloo Wastecats Canibal Kochtopp Racers in recognition of the unique performance they laid on. Even the Elbe Labe team did not go away empty handed; they picked up the KipphäuserOpferAward for the most spectacular crash.

Fastest on the day were the ghost hunters of Gare de La Lune VEB Spukbeseitigung Ostbuster. We congratulate all participants and look forward to the next time.

As soon as one race finishes, preparations begin for the next. New ideas are already starting to take shape in the ‘paddock’. Registration for the 19th Prix de Saloppe on 14th September 2019 has already opened at www.saloppe.de/seifenkistenrennen.