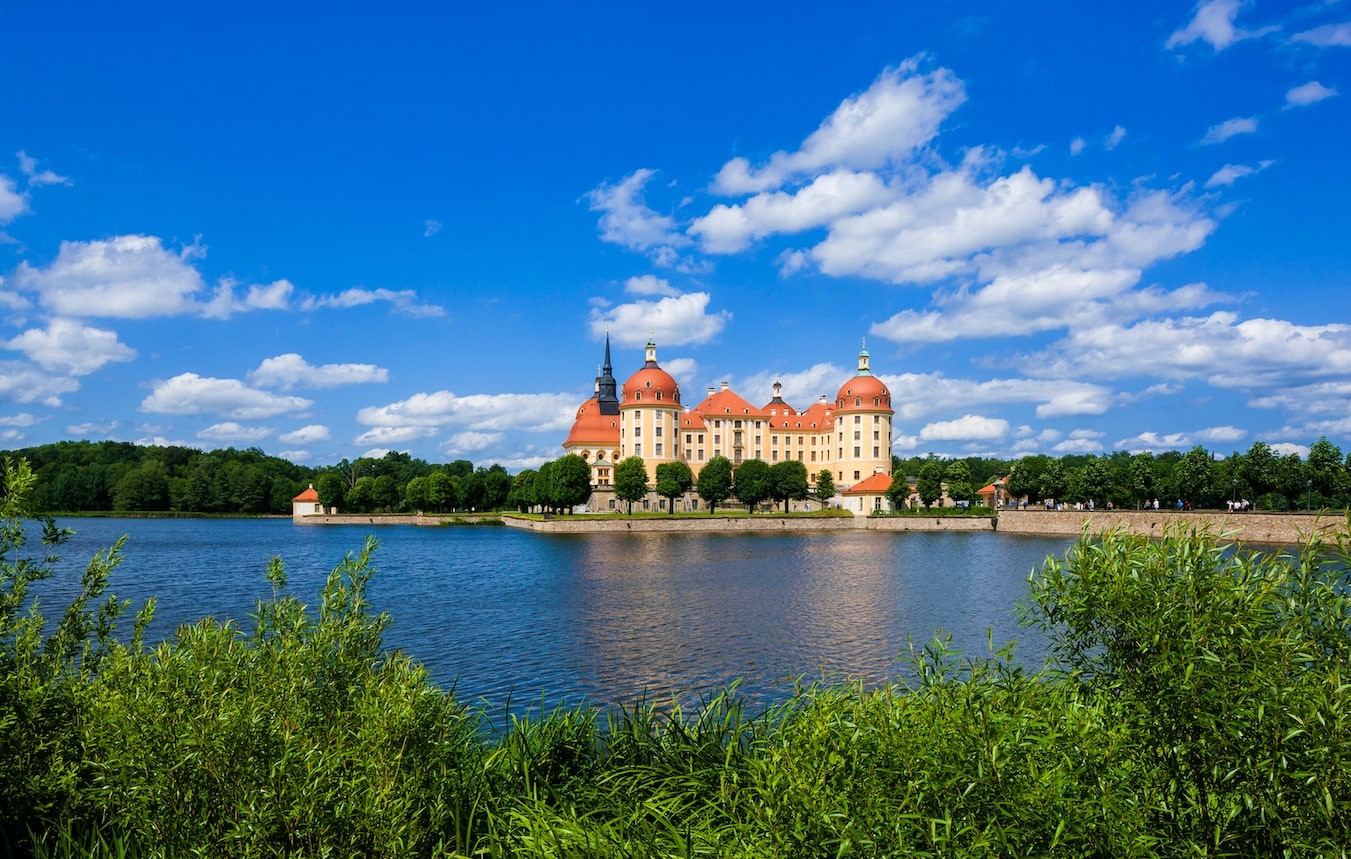 Gourmets and families, art lovers and horse fanciers – they all find what they are looking for in Moritzburg. Because this small town in Saxon Elbland has much more to offer than its stately home. An excursion should also take in the stud farm, Adams Gasthof inn and well-stocked fish ponds.

The most well-known view of Moritzburg is of the castle set on its artificial island surrounded by a large pond. It was initially the site of a hunting lodge built in 1542 by Duke Moritz of Saxony. In 1723, Elector Augustus the Strong began converting the original Renaissance-style structure north of Dresden to the Baroque country palace we see today. It is a popular destination for day trippers. This summer, the Fasanenschlösschen (Little Pheasant Castle) in the castle grounds will be showing 100 large-format colour slides dating back to the period around 1900 (1st May – 31st October 2018). They tell of the beauty of the royal gardens, and of the forest and pond landscape that characterises Moritzburg.

This year, the Moritzburg Castle Triathlon will take place for the 17th time against the impressive backdrop of the baroque hunting lodge (9th – 10th June 2018). In 2018, the event takes on a new format – the so‑called ‘BarockMan Duett’ in which two-person teams share a long-distance challenge.

The Moritzburg Festival is conceived by its organisers as both an experimental laboratory and a gathering of excellence. Its founders in 1993 – Kai Vogler, Peter Bruns and Jan Vogler – modelled it on the famous Marlboro Festival in the USA. Under the artistic direction of the cellist Jan Vogler, it has become one of the world’s most acclaimed chamber music festivals. (11th – 26th August 2018)

Walk with the Brücke

The artists who came together under the name ‘Brücke’ (Bridge) in Dresden in 1905 rank among the most important exponents of Expressionism in Germany. They included Ernst Ludwig Kirchner, Fritz Bleyl, Erich Heckel, Max Pechstein and Otto Mueller. These famous artists would gather each summer in Moritzburg to paint and share their ideas on art. The views they captured on canvas can be revisited on foot.

The state stud farm of Moritzburg was founded in 1733 and is home to more than 80 stallions. To ensure that they are fit for breeding purposes, they need regular exercise. That’s why Ehrenfried, Lord Brown II and their ilk can often be seen trotting through the streets. Just a few hundred metres from the stud farm itself is the parade ground, where the three stallion parades held every September attract more than 17,000 visitors. (2nd, 8th and 16th September 2018)

Käthe Kollwitz (1867 – 1945) is the most important German female graphic artist and sculptor of the 20th century. The house in Moritzburg where she died is open to the public. The museum with its collection of prints, photographs and excerpts from the Käthe Kollwitz’s diary and letters gives an insight into her artistic career which spanned more than 50 years.

Regulars at the bar here have included boxer Max Schmeling and film star Henny Porten. The inn is a Moritzburg institution. It has been licensed for the sale of alcohol since 1675. When brothers Bernd and Uwe Haufe acquired the mighty half-timbered building in 2017, they stated their intention to combine tradition and Zeitgeist: the game dishes, for which Adams Gasthof is well known, remain on the menu, but the interior has been tastefully modernised.

Fish and Forest Festival around the castle pond

The Schlossteich is one of 24 ponds in which the local fishery enterprise, Moritzburger Teichwirtschaft, breeds and catches Saxon carp, popular for its high ratio of filet to bones. The first ponds were dammed in 1502, and since then the fish have been bred continuously. A highlight of the traditional Fish and Forest Festival on the last weekend of October (27th – 28th October 2018) is the grand fishing demo known as the Moritzburger Fischzug.