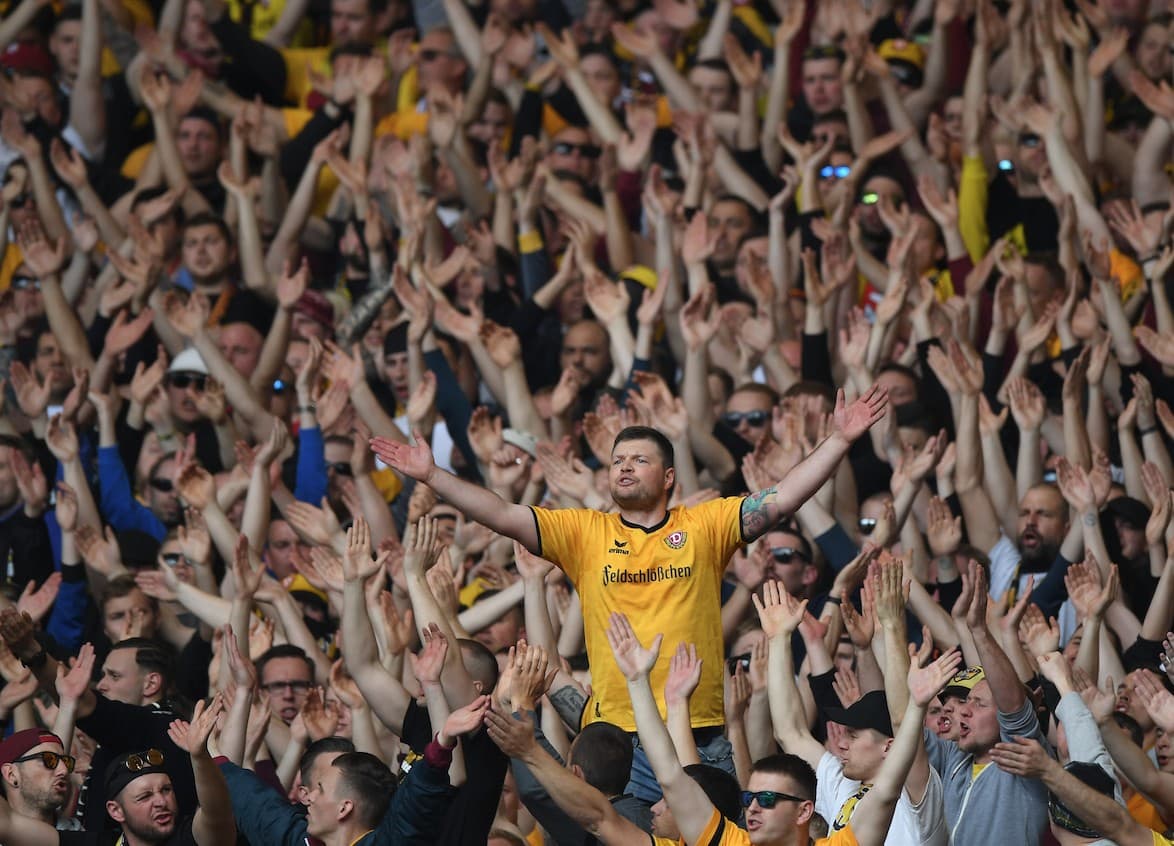 Once a ‘gateway to the world’, today an expression of identity: the people of Dresden maintain a particularly intense – if not always unproblematic – relationship with their football club, Dynamo Dresden.

On display in the VIP room of the stadium are the pennants of FC Barcelona, ​​Atlético Madrid and Rapid Vienna. This was the class of opponent that Dynamo Dresden used to host. In the 1970s and 1980s, when SGD (as local fans affectionately refer to their club) regularly won the East German championships and played in the European Cup against all the big international names, a legend was born that is cherished by fans of the club to this day.

On European Cup evenings, Dynamo became the gateway to a wider world that seemed especially remote in Dresden, where the signal from West German TV transmitters was too weak to be picked up.

SGD remains by far the best-supported club in the former GDR, and Dresdeners feel an abiding affinity with their local team.

One of the architects of this relationship is Hans-Jürgen Dörner. ‘Dixie’, as he is still called today, dictated the Dynamo style of play from 1968 to 1986, winning five GDR league championships and four GDR cup competitions with them. “Dresden has always been a footballing city,” he says. Helmut Schön, who was the manager of West Germany when they won the World Cup in 1974, played for the city’s other (and older) team, Dresdner Sportclub, when it won the German league championship in 1943 and 1944. Dörner describes the city’s relationship with Dynamo today as one of “great affection”.

Dörner was one of those players who helped to establish the club’s reputation for elegant play, as befits the artistic sensibilities of the city and its inhabitants. There was always more at stake than football when Dresden played against the record GDR championship winners from East Berlin, who also went by the name of Dynamo (BFC Dynamo). Because while the Dresden style of play was admired even by neutrals, it was rumoured that BFC’s successful championship campaigns were due to government favouritism and intimidation of referees, a reputation that the club found difficult to shake off with Erich Mielke, head of the East German Stasi, allegedly pulling the strings behind the scene.

The Rudolf Harbig Stadium, as it was officially known in that era, would resound to hostile chants directed at BFC and, by extension, against the political system.

“In the GDR era, the football terraces were seen as a place where you could express yourself more freely than in other public spaces,” recalls Jens Genschmar. He is now 49 years old, sports a Dynamo tattoo on his lower right leg and is the owner of the Dresden Football Museum. “We are obviously mindful of past glories: this club belongs in the top division and should be competing for trophies at international level.” A claim that does not quite accord with the present reality, because the current fixture list includes trips to unglamorous Darmstadt and Bielefeld.

And yet things are actually going quite well for Dynamo Dresden in the second division. Especially when you consider that, not so very long ago, the club was “on life support”, as Ralf Minge colourfully puts it. In the 1980s, the 57-year-old was one of Dynamo’s best forwards and became a club legend. He is now the club’s Sports Director, responsible for piloting it into calmer waters. Because after reunification, there were successive relegations, dodgy investors and yet another relegation for financial irregularities. The club was faced with bankruptcy on several occasions and even looked as if it might fold.

During this torrid period, the fans played – and continue to play – a key role. Sometimes they save the club by dint of sheer dedication, but from time to time, they also get the club into trouble. One occasion that lives in the memory was the legendary ‘Geisterspiel’ (phantom fixture) on 11th March 2012. After one particular riot, Dynamo were obliged to play their next home match behind closed doors. The supporters showed their defiance for the ruling by selling tickets for a ‘phantom fixture’. Although the fans were denied the pleasure of watching the game, this one-off campaign secured the gate receipts that would otherwise have been lost to the club.

However, the locking-out of spectators was only one of several inglorious episodes in which sections of the Dynamo following have brought the club into disrepute. The Dresden hooligan element are notorious, but Sports Director Minge maintains “an ongoing dialogue with the active fan scene”, as he puts it. “The fact that people increasingly vent their anger in the form of violence is a problem for society as a whole.”

It was not until 2016 that the club regained its second division status. Currently, 15 million euros are being invested in a new training facility, and the Youth Academy is one of the best in Germany today. With its wealth of tradition and huge fan base, Dynamo has all the prerequisites for excellence. “Football in general – and football in Dresden in particular – is all about emotion,” says Minge. “Obviously, we aspire to promotion to the top tier, and Europe is the ultimate aim. A dream maybe, but you have to have a dream.”