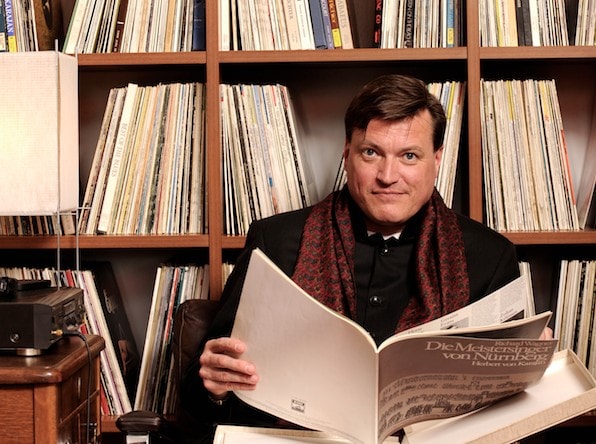 The chief conductor of the Sächsische Staatskapelle is a musical celebrity who has performed all over the world. “I first visited Dresden thirty years ago, and I immediately felt at home,” he says. Perhaps one reason for this is that his ancestors lived here around 1830, as he subsequently discovered from a search in the state archives of Saxony. Here, he reveals his favourite locations in Dresden.

“I like going to the ‘Blue Wonder’, which crosses the Elbe at Loschwitz. It affords a marvellous view of the city. You can see some really beautiful old buildings, and I sometimes think, oh wouldn’t it be nice to live there! The Dresdeners love their historical architecture and really look after it. Perhaps the reason for this is that most of the old centre was destroyed in the war and they were determined to preserve what was still standing. This affection of the Dresdeners for the tradition of their city is really quite special.”

“This is a record shop the likes of which are, unfortunately, very hard to find nowadays. It stocks an exquisite selection of different styles, from rock music and jazz through to classical music. And I was really thrilled when I first discovered a huge wall display containing only classical LPs. The very first one I took down from the shelf was the ‘Meistersinger’, recorded by the Staatskapelle and conducted by Herbert von Karajan. I remember that day very well. Here a photo was taken for the poster campaign when I first became chief conductor in Dresden. That poster still hangs on the door to my office in the Semperoper.”

“Johann Ruttloff is a wonderful eccentric. He makes individually tailored jeans and is knowledgeable about all sorts of fabrics. He sews them on old pedal-powered sewing machines, which he purchases from all over. The rivets and buttons are all handpicked, even those you don’t see. The man is a perfectionist. I have certainly bought five or six pairs of jeans from him. He advised me not to wash certain jeans for a long time, but rather to let them air thoroughly, which was a piece of advice that I found somewhat odd. And if you do wash them, then you don’t have to handle them with kid gloves, because they can take plenty of rough treatment. The fabrics need that, according to Ruttloff, because it’s what gives them their ‘patina’. The jeans he sells are extremely hard wearing and durable; they don’t go mangy but instead age gracefully.”

“One of my favourite restaurants is the Alte Meister (Old Masters), which is actually on Theaterplatz itself. I sort of regard it as my ‘works canteen’. The boss, Herr Graul, is a wonderful person. I like the historic building, and the food they serve there is simply divine. It’s where I first became acquainted with a local delicacy – Kranzlänge, a Saxon cake. It is supplied by Bäckerei Wippler. This long-established bakery is located on the other side of the River Elbe, very close to the Blaues Wunder bridge. I called in once and asked them why they don’t open a branch in the Old Town, because then I could buy Kranzlänge there instead. But the answer was no, they didn’t want to venture across the bridge, as they wanted to remain loyal to their regular clientele. And in any case, they didn’t have the capacity to increase production. I have to say that I find this attitude very refreshing. So, ever since then, I have treated myself to a Kranzlänge after every meal or with a cup of espresso whenever I’m in the Alte Meister.”

“Grosser Garten is a unique open space, if only because of its enormous size. I love going there. The baroque garden is a wonderful sight. The Palais is amazingly beautiful, even though it has long been in need of renovation. This is a building that exudes an aura of history. It is where Richard Wagner and Robert Schumann conducted concerts in their era.”

Baroque garden of Großsedlitz at Heidenau

“This is a gorgeous garden that dates back to the 18th century. I sometimes go there in the early evening or after a rehearsal and enjoy its sheer splendour. It’s not all that far away from Dresden. And the recent renovation has restored the park to its former grandeur.”