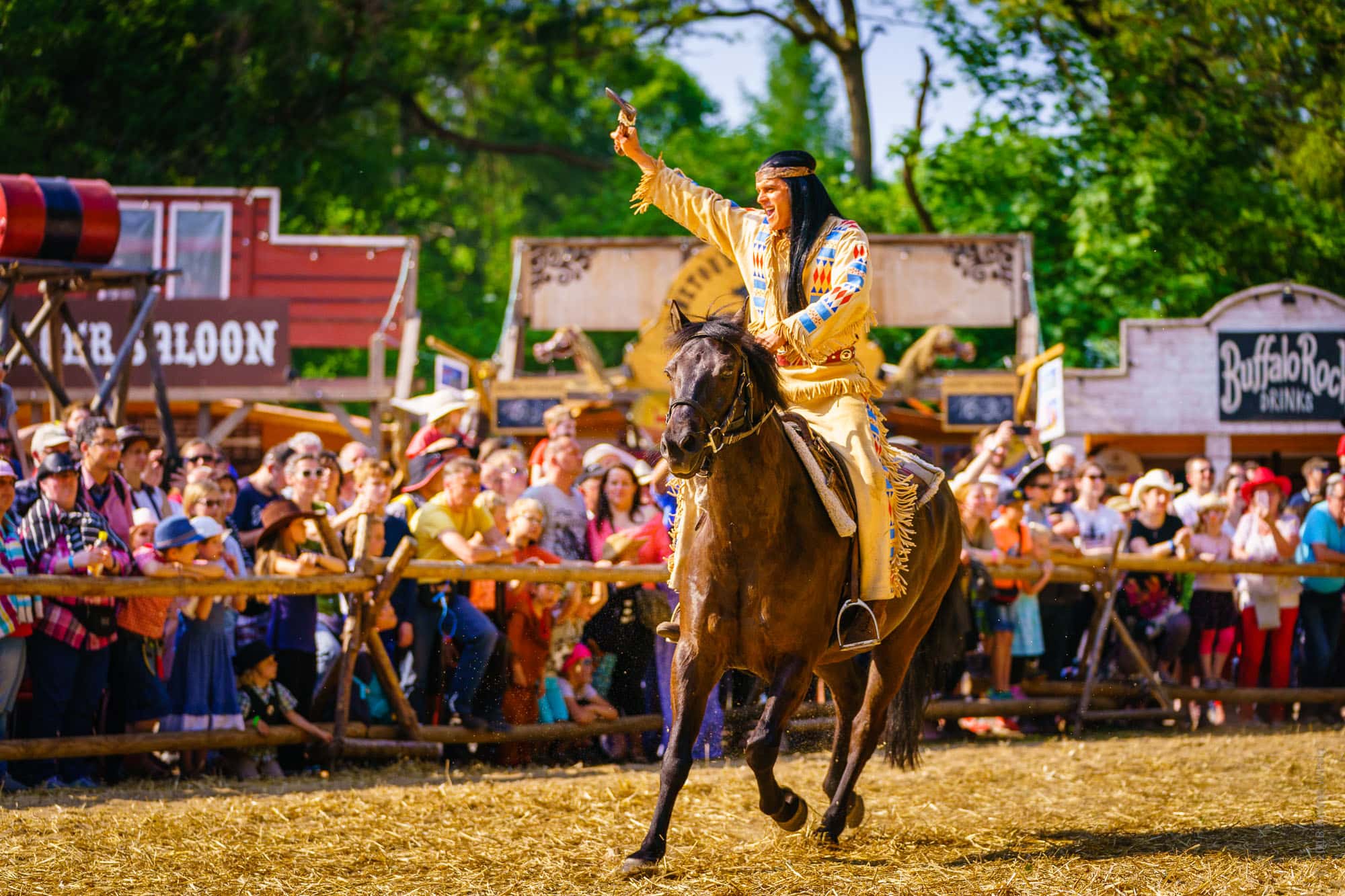 Smoking Colt 45s, a honky-tonk piano jangling away in the saloon and much more besides: once a year, Radebeul is transformed into a Wild West town for the Karl May Festival.

The air is thick with gunpowder. With squealing brakes and pounding pistons, the Santa Fe Express grinds to a halt. A band of outlaws has prepared an ambush for the old steam locomotive on the stretch of track between Little Tombstone and White Horse Camp, and there is no way through, making the passengers on the train easy prey for the robbers.

Scenes like these are acted out on the weekend after Ascension – not in the lawless Wild West, but in Saxony.

Radebeul is the home town of Karl May. This is where he lived at Villa Shatterhand and wrote his great adventure novels. And it is here that his legacy is commemorated during the annual Karl May Festival.

The Lössnitzgrundbahn heritage railway doubles as the Santa Fe Express. The Weisses Ross halt is temporarily transformed into White Horse Camp. The unruly town of Little Tombstone is recreated at the Lössnitzgrund railway station, and visitors can take a trip back in time.

There are six camps in all, each of which provides insights into the reality of the 19th century. Wild West performers re-enact the daily lives of hunters, trappers, settlers, prospectors and cavalrymen. The use of German as the language of these camps is not without historical justification: by 1860, there were no fewer than 1.3 million emigrants of German extraction living in what is now the United States. Fox Home Camp shows the country from a more peaceful perspective, whereas Fort Virginia specialises in the military. This is where the Virginia Volunteers assemble to represent a German brigade in the American Civil War (1861 – 1865). From the flag ceremony right down to the uniform buttons, no effort is spared to achieve authenticity.

The headline for the 28th Karl May Festival is ‘Winnetou, Apache chief’. For the first time, members of the White Mountain Apache Tribe from Arizona will be visiting Radebeul. They will give talks about their culture and tell the true stories of their chiefs.

The exchange with Native Americans is in any case a traditional feature of the festival. Even before the festival gets underway, the Karl May Museum is organising an ‘Indian Week’: Ed E. Bryant, artist and member of the Tsimshian Nation, is a guest of the museum.

There will be an exhibition entitled IndianerART at the halfway point of the festival as well as fireside discussions of the Winnetou legend. Members of the White Mountain Apache Tribe, the Oglala Lakota Nation, the Kwakwaka’wakw Nation and the Tsimshian Nation will be performing ritual music and ceremonial songs. And of course, there will be no shortage of fiction and outright fantasy; after all, Karl May himself was known for being economic with the facts. The Sächsische Landesbühnen ensemble will be staging excerpts from their repertoire, and on 31st May, a short film will be premiered – Showdown in Fort Henry – featuring members of the Radebeul Western Union.

Visitors will not be unduly surprised that the programme of music will be other than 19th century in character. Bands such as Stringcaster, Fünf Patronenhülsen and Slow Horses will be putting on frenzied concerts with rock ’n’ roll, country, bluegrass, folk and rockabilly.

The festival comes to a climax on Sunday with the Sternritt parade, one of the most important traditions of the festival: on their way to Radebeul, the Sternreiter try to cover as great a distance as possible. The record was set in 2012 when Randy Helbig rode 1,320 kilometres to Radebeul. After the horses’ hooves have stirred up the dust, the air is filled with smoke again: the trophy for the Sternritt winner each year is a handcrafted peace pipe.

The Karl May festivities have been held every year since 1992 on the weekend following Ascension Day.