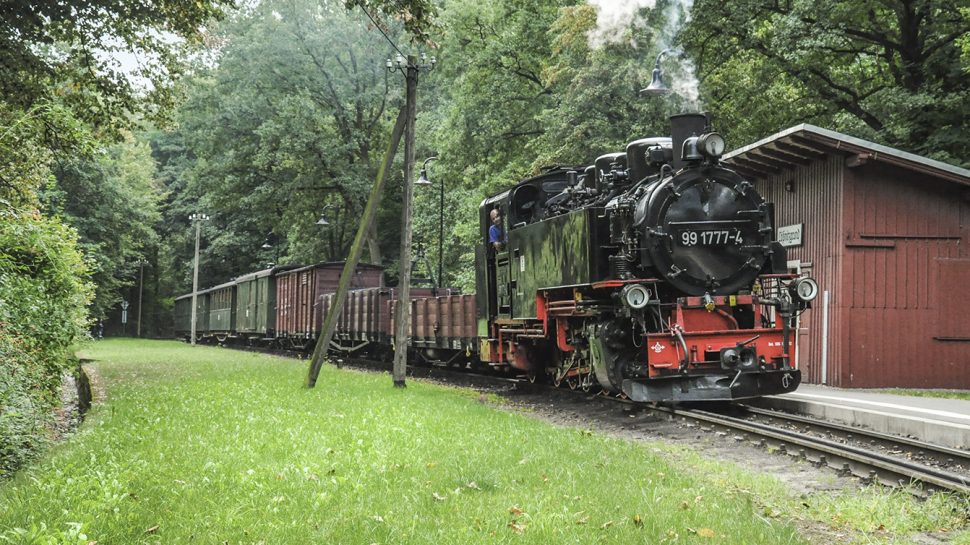 Whether it’s the Trans-Siberian Railway or the Hogwarts Express, people are charmed and fascinated by trains. An ICE may get passengers to their destination at high speed, but a ride in a steam train is an emotional experience. Saxony has many such historic railways, and one of them has an anniversary coming up.

The Lössnitzgrundbahn dates back 135 years. This narrow-gauge railway, also fondly known as the ‘Lössnitz Dachshund’, runs between Radeburg and Radebeul. So what is it that makes this train so special? We talked to someone well qualified to answer the question: Kay-Torsten Zimmermann is a train driver, rail enthusiast and volunteer member of Traditionsbahn Radebeul, the association that manages the line. Sitting in his office, which nestles in the Lössnitzgrund gorge, we can hear the locomotives chugging away in the background.

Herr Zimmermann, how did you end up in this line of work, which must surely count as a dream job for any youngster?

Yes, it is, and it was what I always wanted to do from a very early age. I started out working on the Parkeisenbahnpark in Dresden, which also used to be known as the ‘Pioneer Railway’. And then I graduated to being an actual train driver on the Reichsbahn, the state railway in the former GDR.

So you don’t just drive a steam locomotive on the Lössnitzgrundbahn?

That’s right. During the week, I work on the DB Regio network driving electric and diesel trains in the Dresden area.

So you drive these old locomotives on a voluntary basis?

What’s so special about the Lössnitzgrundbahn?

The Lössnitzgrundbahn is one of Germany’s few narrow-gauge railways that are still in existence, and there is a high concentration of them here in Saxony. What makes this line so special is the variety; it goes through changing scenery. First of all, you have the Lössnitzgrund, which is a steep-sided valley, then Moritzburg with its lakes and finally the approach to Radeburg through undulating landscape. So you get a lot of variety over the relatively short distance of 16.5 kilometres.

The Lössnitzgrundbahn has acquired the nickname ‘Dackel’ which is short for ‘Dachshund’. How did that come about?

There are different versions of the story, but the most common is that, in earlier years, there were locomotives that looked a bit like a dachshund while they were on the move. Hence the nickname.

Is there an atmosphere on heritage railways that you won’t find on their modern equivalents?

Yes, of course. Our oldest trains are from 1895. They look just the way they did when they belonged to the Königlich Sächsische Staatseisenbahn – the Royal Saxon State Railways – during the period until the end of the First World War. These trains have a unique character, with open platforms and coal-fired heating. There are luggage nets, beautiful upholstered seats and even some wooden ones. In those days, they still had Third Class compartments.

What makes driving one of these trains such an enjoyable experience?

In a modern driver’s cabin, you’re on your own. The exertions are of a more physical nature. In a steam locomotive, however, it’s quite different. The crew have much more of a connection with each other. You have a train driver and a stoker – that’s teamwork! You can also clearly sense what the machine is doing.

Do the trains here run all the time?

The Sächsische Dampfeisenbahngesellschaft is responsible for the regular timetable. The train operates daily but with slightly more modern rolling stock: locomotives from the 50s with carriages that were overhauled in the 70s. And in addition, there is our historic train which we use for special trips, of which there are around 40 per year. For these, we send out even older rolling stock from the late 19th and early 20th centuries.

We are, of course, organising a special outing to commemorate the anniversary of the Lössnitzgrundbahn. The season starts every year in February with a service for visitors to the Radeburger Carnival. There are monthly trips with different themes. Easter trips, for example, and the Karl May Festival in Radebeul with a staged hold-up by bandits! Now, in September, we have our own Schmalspurbahn-Festival, and in December there will be a St Nicholas outing.

Do you have a favourite railway? A heritage line on which you would like to drive the locomotive?

There are quite a few railways that I haven’t been on yet. I’ve never had an out-and-out favourite, but two years ago, I went for a ride on the Rhodope railway in Bulgaria. I would like to go there again.

Back in 1900, the narrow-gauge railways in Saxony were the most important networks of their kind in Germany. The routes covered a total distance of more than 500 kilometres and were particularly popular for excursions – a legacy that is being preserved by railway associations and volunteers. You have the opportunity to join in the celebrations for the 135th anniversary of the Lössnitzgrundbahn at the Schmalspurbahn-Festival to be held on the weekend of 14th/15th September at Moritzburg station.

The glorious railway history of the Free State of Saxony is perpetuated in the Dampfbahn-Route Sachsen, a rail network and holiday attraction for tourists and locals, which links up five narrow-gauge railways operating on a daily basis, three other steam-powered heritage railways, numerous monuments and several museums. The Dampfbahn-Route also incorporates the world’s oldest and largest paddle steamer fleet as well as some amazing cable cars.

Three branches of the Dampfbahn-Route Sachsen with a total length of around 700 kilometres converge on Dresden.