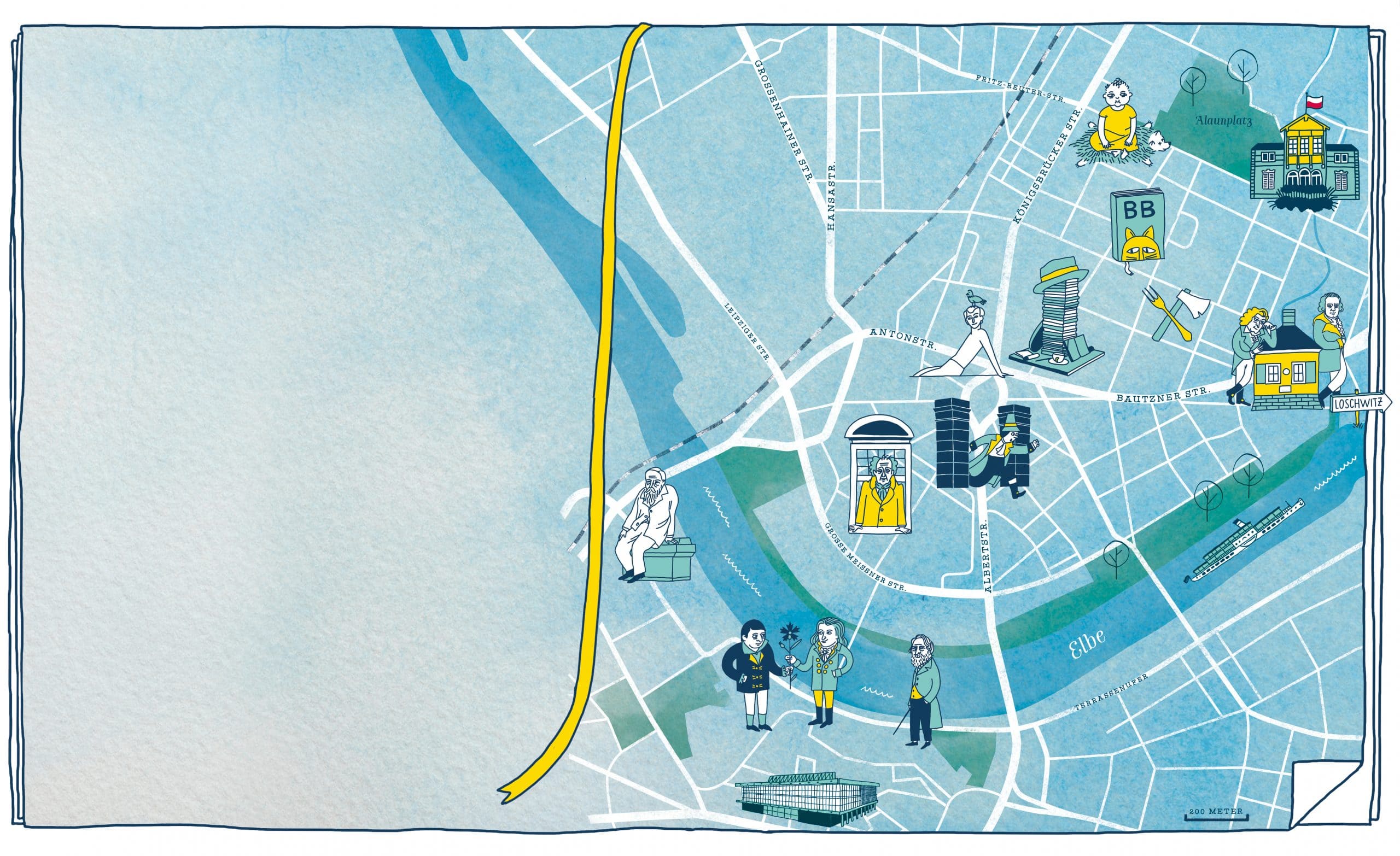 Dresden has always been a city of poets. Most of the original locations that would confirm this have been destroyed. But it is still possible to find traces of the great writers today.

In the late 18th century, Dresden was a major hub of the literary world. Some of the great exponents of the Romantic school of writing found their inspiration here. In 1798, Novalis, Schelling and the Schlegel brothers paid a visit to the Old Masters Picture Gallery. This experience shaped their understanding of art. The baroque town house, number 13 Hauptstrasse, which formerly belonged to the painter Gerhard von Kügelgen, is today the museum for Dresden’s early Romantic period . One of the rooms is dedicated to Heinrich von Kleist, who lived in the city between 1807 and 1809. In 1813, Goethe called in on the owner on one of his seven visits to Dresden. He wanted to have a good view from an upstairs window of the entry of Emperor Alexander of Russia. Starting from Albertplatz, you can walk down a street called ‘Am Schwarzen Tor’ – although you won’t see a black gate anywhere along it. It was demolished 200 years ago, but previously immortalised in E.T.A. Hoffmann’s novella Der goldene Topf (The Golden Pot).

At the end of the 19th century, the house of Christian Gottfried Körner was a popular meeting place for the literary elite. In 1785, his friend Friedrich Schiller came to visit him and subsequently spent several months living in a small house on Körner’s vineyard at Loschwitz.

The Schillerhäuschen, which is preserved to this day, was where he wrote his play Don Carlos. Another literary museum commemorates the Polish writer Józef Ignacy Kraszewski and the Polish emigrants in Dresden. It is located at 28 Nordstrasse where Kraszewski lived after leaving Warsaw in 1863.

Dresden also had a fascination for Russian writers: Dostoevsky, who lived here for a while, has been given his own monument. And the figure of Raskolnikov from Crime and Punishment gave his name to a bar at 34 Böhmische Strasse.

Turgenev too knew Dresden well; the nal scene of Fathers and Sons takes place on Brühl’s Terrace 11 . And then, of course, there is the Erich Kästner Museum at number 1 Antonstrasse. The villa belonged to Erich’s rich uncle whom he often visited as a boy. Erich Kästner was born at number 66 Königsbrücker Strasse in 1899.

His legacy is honoured not only in the interactive museum but also at the Kästner Café (1 Alaunstrasse), outside which there is a monument to the poet.

If you have not had the time to read all of these great works, then why not pay a visit to Stadtbibliothek (municipal library)? Or try Büchers Best, which has everything a good bookstore needs: elegant surroundings, atmosphere and good coffee.