From the Elbe, Dresden and the surrounding area are beautiful. © Mike Hillebrand

Seen from the river, Dresden and the Elbland are at their most attractive. Our author also noticed this when he paddled from Dresden to Diesbar-Seußlitz. Fortunately, the Elbe currently carries more water than during its tour. If you get into the canoe now, you will stick your paddle into the water well above the hunger stones.

The heron takes off in flight. A few mighty flaps of his wings and he is in the air. Using his full wingspan, he soars above the river which flows unimpressed below. Horses and sheep graze on the embankment, a family of ducks waddles into the water, a lonely stork glances dolefully at the passing canoe, and the summer sun beats down from the sky. A gentle breeze ruffles the surface of the water, soon to be sliced through by the boat, and the scent of freshly mown hay drifts across from the fields. The perfection of the moment.

The Elbe wants to be wrested every meter

A moment in which you even manage to forget the ache in your shoulders that pains the untrained oarsman navigating the Upper Elbe. Because although the motion of a canoe might appear weightless to an observer, every metre has to be wrested from the Elbe – it will not be the current alone that carries us from Dresden to Meissen and beyond.

Our tour starts one summer morning at the Kanu Dresden depot in Wostra to the south of the city, with just a hint of the heat that will intensify over the coming hours. The canoe rental company offers guided tours for school parties and other groups, but we have gone for the simplest option: we are departing from Wostra and paddling northwards through Dresden to the other side of Meissen, where we will then be met and driven back the follo-wing day. We haven’t specified a precise pick-up point, as we want to see how far we can get.

We skip through the preliminaries with the Kanu Dresden proprietor, as my friend is an ex-perienced canoeist. He will sit astern where he can not only steer but also keep an eye on me, the novice. Hats pulled firmly down and factor 50 sunblock on our arms, we plunge our paddles into the water and set off.

The first of many spectacular sights is not long in coming

The first of many spectacular sights is not long in coming. On the hillside to our right is Pillnitz Castle. But we decide against breaking our journey at such an early stage, and in any case, our arms still have full reserves of energy. Otherwise, it would be an ideal port of call with its various museums, magnificent gardens and choice of restaurants. Instead, we cautiously manoeuvre to the bottom of the steps leading up to the castle. This is where, 300 years ago, the Saxon prince-electors built a marina for elaborately decorated gondolas, one of which is still exhibited in the castle grounds. The low level of the water in mid-summer has revealed something that is usually well hidden below the surface – a mossy green ‘hunger stone’ dating back to 1873. The year was carved in the rock, because the Elbe was running exceptionally low, restricting river traffic and reducing the fish catch. The grain in the fields and the fruit on the trees also withered and people starved.

The trip on the river actually leads through history

Since then, the Elbe has frequently fallen to low levels, river traffic regularly encounters problems, and we will find even more hunger stones. They are just as much part of the his-tory of the Elbland region, which lived for centuries from and with the river and its whims, as are the colossal television tower erected in 1969 and the Blaues Wunder (Blue Wonder) bridge, an engineering tour de force that remains as elegant as it was in 1893, the year in which it was built. 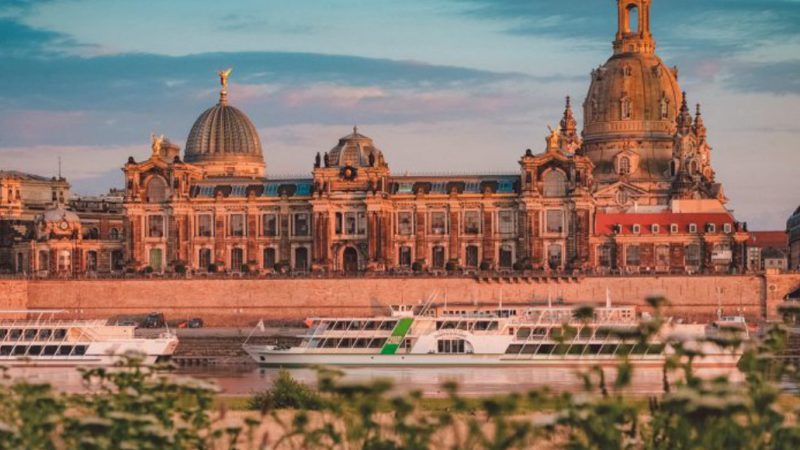 British bloggers, Coralia and Gergely Varga travel the world writing about their experiences, but it’s Dresden they’ve chosen to put roots down.

Constituting an integral part of the Blue Wonder experience are the three beer gardens at the foot of the bridge, overlooked by vineyards. The history of the Schillergarten dates back to the first half of the 18th century. I wouldn’t mind emulating German national poet Fried-rich Schiller (after whom the restaurant is named) and stopping off here for refreshments. But we’ve so far covered a distance of only seven kilometres, and there are 33 more to go before we reach Meissen.

So our journey continues on the Elbe which calmly flows through an ancient landscape graced by many fine castles and palaces. Three of the most stately now appear, as if ex-tending a welcome to Baroque Dresden: the world-famous trio of Eckberg, Lingner and Albrechtsberg.

From the water, the city looks even more powerful and impressive

A more recent feature spanning the river is the Waldschlösschenbrücke. The Elbe flows un-der this bridge and on to the next, the Albrechtsbrücke, signifying our arrival at the Old Town. We glide in suitably respectful style past the world-famous skyline, our stroke being much more coordinated than when we first set out. Or maybe because my friend in the rear is now deftly compensating for my inadequate technique.

The river carries us through the wine country of Saxony

We now see the Yenidze, the former cigarette factory built to resemble a mosque, which signifies that we have left the bustling centre of Dresden behind us. The river now flows past industrial buildings which eventually peter out. We pass by the mouth of the Weisseritz which joins the great Elbe at such a gentle pace that our canoe does not even wobble. It seems unimaginable that this tributary overflowed its concrete banks in 2002 and flooded Dresden’s main railway station. We are now almost alone on the river, with only birds for company. A captivating tranquillity hangs over the meadow landscape.

If the peace and quiet gets too much, we have the option of stopping off at the historic town of Altkötzschenbroda or at the Lügenmuseum (Museum of Untruths) curated by artist Reinhard Zabka. But we proceed on our way, silently paddling in ever more synchronised rhythm along the Elbe. The river now carries us past some of the most notable wine estates in Saxony. Staatsweingut Schloss Wackerbarth is situated relatively high on a hillside amidst carefully cultivated steep slopes. Shortly before Meissen, the geology changes noticeably, with the grey sandstone, so characteristic of Saxon Switzerland, giving way to the rust-red rocks of the Spaargebirge, the smallest of Saxony’s ranges of hills. From time to time, the water swirls ahead us, indicating a small gust of headwind obliging us to paddle a little harder.

Quarters for the night are abundant near the shore

We have now covered a distance of nearly 40 kilometres. The arms of this keyboard worker are beginning to tire, but the skipper in the stern laughs merrily – he is happy to paddle on. As far as I’m concerned, though, it’s high time that we sought out accommodation for the night. There are riverside hostels as well as special boarding houses for canoeists, and also guest rooms made available by canoe and rowing clubs. Various wine estates (including Schuh and Vincenz Richter) along the Elbe have their own wine shops and restaurants where river users can tie up and spend a few happy hours. Alternatively, you can treat those sore muscles to a very comfortable bed at the Dorint Parkhotel. So we haul the boat up through the high grass on the embankment and, because we are not enthusiastic about carrying it all the way to the underground car park of the hotel, we chain it to a road sign, putting our trust in the locals and the combination lock supplied by the canoe rental company.

A new breathtaking view comes into sight around every bend

The next morning, fortified by an excellent breakfast in the hotel dining room with its fine view of the Albrechtsburg castle, our journey continues. The muscular stiffness I was fearing has failed to materialise and the paddling goes well. The air is still, and the scenery as we approach Meissen seems even lovelier. But maybe that’s because every stroke on this final stretch of our journey is feeling like far less of a physical effort. The Elbe meanders, and a new breathtaking view comes into sight around every bend. We repeatedly encounter herons standing in the shallow water, contemplating us and our canoe with interest. We see cormorants and lapwings, and is that bird of prey possibly a marsh harrier?

Diesbar-Seusslitz is just up the road, and we’re in Lehmanns Weinstuben next to the river. Having tied up our canoe and called the pick-up service, we are now sipping a glass of gleaming Müller-Thurgau. A perfect end to a journey with many perfect moments.