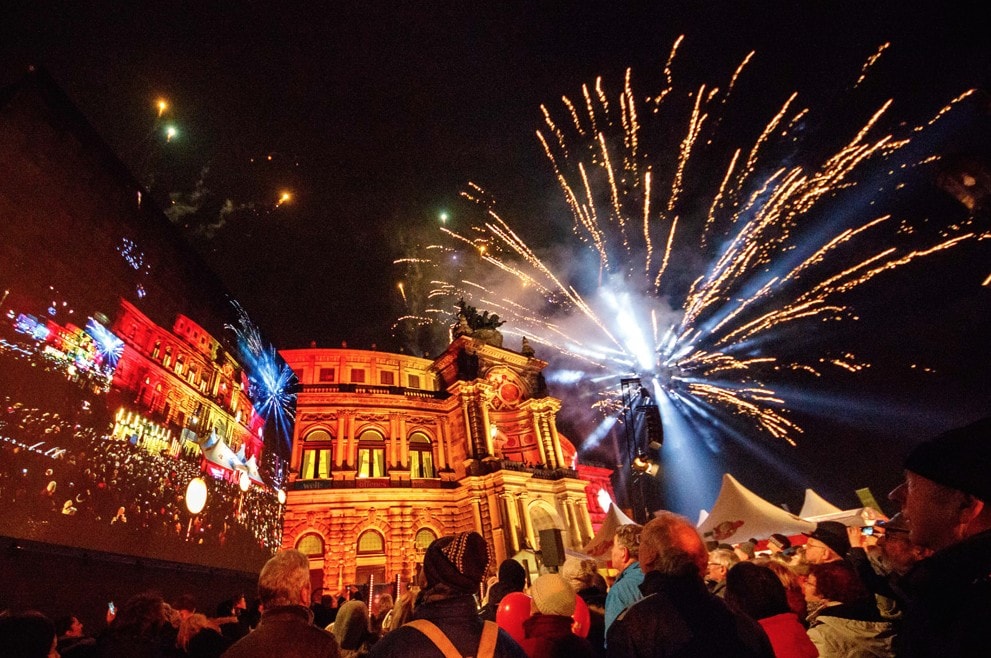 Christmas and winter – a time of the year when we like to snuggle up on the sofa with a mug of hot cocoa or a glass of mulled wine in the company of our loved ones. But equally, there are many good reasons to wrap up warm and go out between December and February. Here are ten of the most convincing:

An activity that takes place against a unique backdrop on one of the three ‘pop-up’ skating rinks that are open during the winter months. One of them will be installed at the Hotel Taschenbergpalais Kempinski Dresden, another (plus winter slide, ice curling and refreshment stalls) on the Altmarkt, and the third at the Weisser Hirsch concert venue in the Dresdner Heide district. There is enough elbow room for every skill level: 1,000 square metres of ice for practising, falling over and putting on a star performance. There are skating classes for those who lack the confidence to go solo.

Eisbahn im Taschenbergpalais in the courtyard of the Hotel Taschenbergpalais Kempinski Dresden, 01067 Dresden. Until 27th January 2019: open Monday to Friday 3pm – 10pm, Saturday, Sunday and public holidays 11am ‑ 10pm. Dresdner Winterzauber (Dresden Winter Magic) on the Altmarkt, 01067 Dresden. From 19th January until 4th March 2019, open daily 10am – 10pm. Dresdner Winter on the Konzertplatz Weisser Hirsch, Stechgrundstrasse, 01324 Dresden. Until 3rd March 2019: open Monday to Friday from 2pm; on Saturday, Sunday and public holidays from 10am; during the school holidays, daily from 10am.

Once again this year, Schloss Moritzburg near Dresden will be transformed into a magical fairy-tale castle. Moritzburg was used as the set for the ever popular film Drei Haselnüsse für Aschenbrödel (Three Wishes for Cinderella). The exhibition provides fascinating insights into the history of the castle and the making of the movie.

Under Saxony’s most famous Prince Elector, Augustus the Strong, various country residences and lodges were built within a few kilometres of Dresden Old Town. One of them is Schloss Wackerbarth. It is idyllically located in the midst of vineyards, producing its own excellent wines, both sparkling and still. End the year on an elegant note at a New Year’s Eve ‘celebration of the senses’ with champagne reception, buffet and live band.

4 A journey through time

Being there in person always gives a different perspective. No longer a problem thanks to Virtual Reality. TimeRide VR takes visitors back 300 years to Baroque Dresden. The new permanent exhibition has now opened in the Taschenbergpalais opposite the Zwinger. Dresden in the Baroque era can also be visualised in the Panometer. Yadegar Asisi’s artistic ‘snapshot’ showing everyday life in the Saxon royal capital will remain on display until 6th January 2019. From 12th January, it will be replaced by Dresden 1945, an installation by the same artist. Asisi recreates the devastating air raid on the city towards the end of the Second World War. The panorama received the 2016 German Design Award Spezial.

A combination of breathtaking acrobatics, humanely trained performing animals and hilarious clowns makes this Christmas show a very special experience for all ages. Also making a key contribution to the circus atmosphere are the professional musicians of the Big Band under the baton of Oleksandr Krasyun. The highly regarded Genuss-Manege circus restaurant opens two hours before the show.

In Dresden, you can easily find yourself transported back to your childhood for a few hours, for example under the colourful dome of the Yenidze, where the dancers, musicians and actors of the ensemble bring stories from One Thousand and One Nights to life. Or in the Semperoper, where Hansel and Gretel will be performed in December. These two famous siblings are also appearing at the Staatsoperette (State Operetta). The Boulevardtheater will be staging Schneewittchen und die sieben Zwerge (Snow White and the Seven Dwarfs) while the Staatsschauspiel im Palais im Grossen Garten will be performing their version of Charles Dickens’ A Christmas Carol.

A top-class sporting event set against a spectacular urban backdrop – this is the FIS Cross-Country Skiing Sprint World Cup which Dresden will be hosting for the second year in succession in 2019. The starting line is on the Königsufer, after which the race proceeds along the Elbe embankment past the Augustus Bridge. The contestants then turn around at the point from which the famous ‘Canaletto’ view of the Old Town can be seen, i.e. on the right bank of the Elbe to the west of the Augustus Bridge.

During Advent, the Kreuzkirche Dresden will be giving a number of concerts, including one billed as Striezelmarktmusik. So while Germany’s oldest Christmas market is its usual bustling self, the church will provide a refuge of soothing organ music. One of the highlights of the pre-Christmas programme at the Kreuzkirche is the traditional Weihnachtsliederabend sung by the Dresdner Kreuzchor (dates: 10th and 22nd December). On 20th December, the Boys’ Choir will as usual perform at the Grand Advent Concert in Dresden’s largest sports venue, the Rudolf Harbig Stadium.

Schloss and Park Pillnitz are transformed this winter into a gleaming fairy-tale landscape with a breathtaking show of illuminations designed to show the architecture to best effect. The circuit of the Christmas Gardens is approximately two kilometres in length and has all sorts of surprises in store.

10 The gala ball of all gala balls

The SemperOpernball is one of the most important opera balls in Europe and, as usual, one of the major highlights of the winter season. Faszination Dresden – Träume werden wahr (The fascination of Dresden, where dreams come true) is the theme that has been chosen for this year’s ball. The compere will be Roland Kaiser.

In the Semperoper Dresden, Theaterplatz 2, 01067 Dresden. On 1st February 2019, starting at 6pm. It coincides with the SemperOpenairball held on Theaterplatz in front of the opera house. Tickets are only available online.