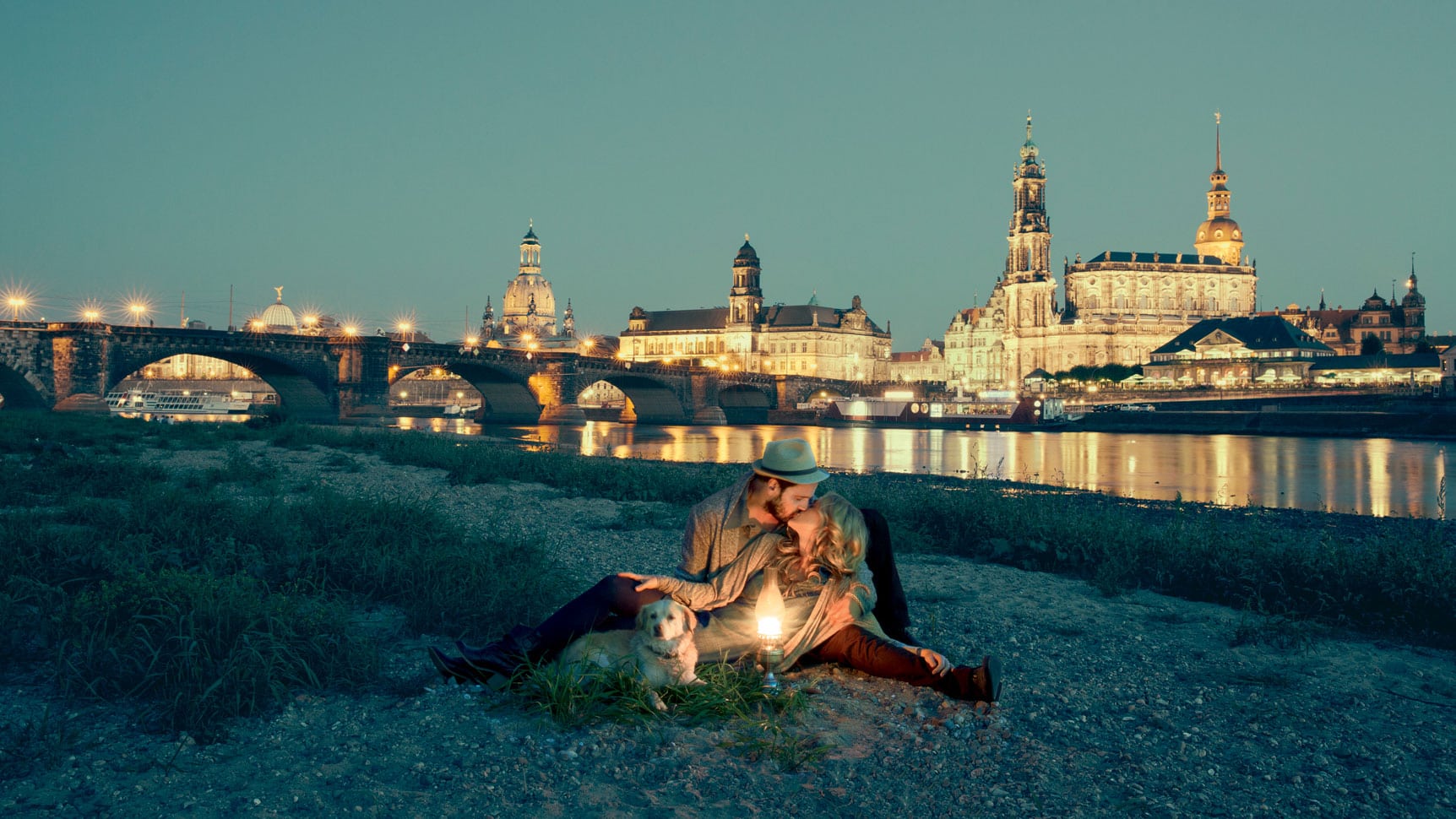 Many couples visit Dresden for a short break – because Dresden has many romantic spots to offer. To the day of the kiss, we introduce the eleven most romantic locations of the Elbflorenz.

From the dome of the Frauenkirche

All Dresden can be viewed from the dome of the Frauenkirche. The viewing platform is 67 metres up and requires sturdy calf muscles on the final steep part of the ascent. But when you get to the top, you will experience a thrill – certainly when you look down vertically onto the square below.

The most secluded sandy beaches on the Elbe are best approached by boat; in fact, many of them are accessible only via the river. You can hire all manner of rivercraft, from a canoe to a mini-yacht. If you’re not in possession of a sports boat licence, then there is nothing to stop you rowing. Or you could simply purchase a ticket for the paddle steamer.

The grassy Königsufer embankment on the right bank of the Elbe not only affords the best panoramic view of Dresden’s baroque skyline but is also ideal for a picnic. As long as you have a bottle of sparkling wine and two glasses, you are assured of a romantic evening, with the silhouettes of the towers opposite providing a romantic and ever-changing backdrop.

The hero pulls in the oars, allows the boat to drift slowly along and professes his love to the heroine. You too can recreate this classic film scene on the Carolasee, the lake in the middle of Dresden’s Grosser Garten. Or maybe even reverse the roles.

This long and narrow garden on the bank of the Elbe is home to over 120 species of roses. At regular intervals, you will come across contemporary sculptures and – even more importantly – park benches. The Elbe river is never far away, nor is the café at the east entrance. Interpersonal relationships can be deepened over a glass of wine until 11pm.

The Canaletto perspective also applies in the other direction: from the tree-shaded benches of the Brühlscher Garten, your gaze is drawn across the river to Neustadt. Here too, a grassy embankment is irresistible to sunbathers and picnickers, while the Delphinbrunnen (Dolphin Fountain) provides welcome shade.

This delightful excursion starts at the valley station with its sign – ‘Schwebebahn’ (suspension railway) – in golden Art Nouveau lettering. The steel framework that suspends the stepped carriages looks like a leg of the Eiffel Tower. At the end of the leisurely ride, you will find an observation tower with cafe and a small-scale museum about the suspension railway. If you prefer to return to the valley station on foot, the Ziegengrundweg winds its way through lush greenery.

Visitors do not casually wander into the Nymphenbad, as it can only be accessed via the stairwell of the Wallpavillon. For this reason, the courtyard with its fountain and surrounding alcoves occupied by Tritons and nymphs is one of the more secluded spots in Dresden’s Zwinger Palace. And why do the nymphs have that knowing smile on their faces?

In the grounds of Pillnitz Palace

King Johann of Saxony was one of the greatest romantics in the history of his country. He founded his own Dante appreciation society and had the perfect venue for meetings, namely the Chinese Pavilion, where he would read from the Italian poet’s work in the company of Ludwig Tieck and Carl Gustav. The grounds of Pillnitz Palace are still a romantic idyll.

Moritzburg has been associated with ‘romance’ in the sense of love since the castle was used as a location for the 1974 DEFA film Drei Haselnüsse für Aschenbrödel (English title: Three Wishes for Cinderella). The location certainly wasn’t picked at random. The harmonious interplay of lakes, castle, statues, fountains and the surrounding forests invite visitors to take a pleasant afternoon stroll.

Secular and spiritual power stand majestically alongside each other on the hill overlooking Meissen. The ascent on foot is charming. Medieval houses such as you might see in the works of Ludwig Richter (and which have changed very little from when he painted them), narrow alleyways and finally the arched curtain windows of the Albrechtsburg and the breathtaking gothic vaulted ceiling of the cathedral – these feats of architecture reinforce our view of the Middle Ages as a romantic era.