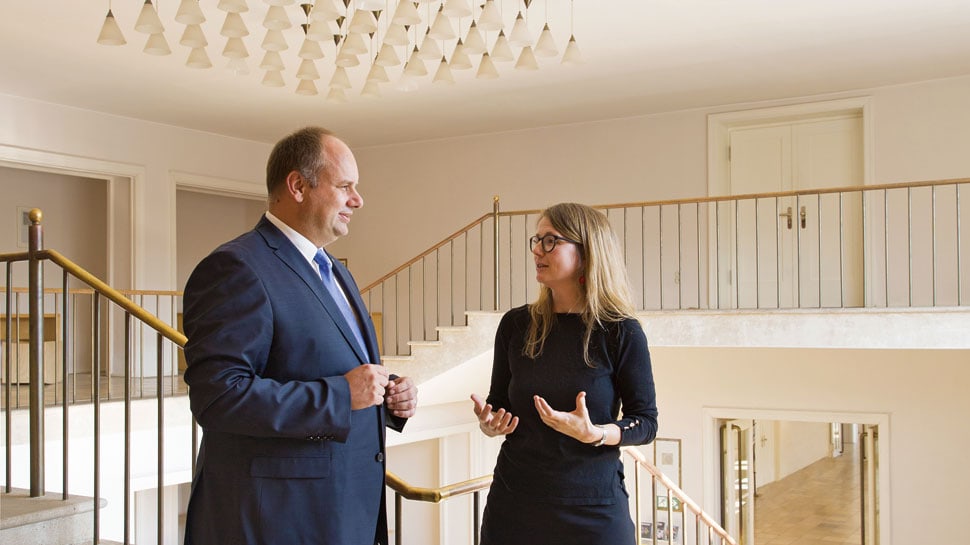 Working hard to maintain social cohesiveness: an interview with Mayor Dirk Hilbert and Deputy Mayor of Culture and Tourism Annekatrin Klepsch. We discuss the direction in which Dresden is heading with leading figures from business, science and culture. By Siiri Klose

What exactly is going on in this city?

The reputation of Dresden has taken quite a few knocks in recent months, primarily due to PEGIDA, the far-right anti-Islam movement. How has the city been responding to the situation, and you two in particular?
Hilbert: It’s the biggest challenge we face at the moment. The conflicts that come to the fore in Dresden also manifest themselves in other parts of the country. Even so, the antics of a few hundred rowdies affect the way 500,000 Dresdeners are currently perceived by the outside world. The public have some legitimate concerns and fears, and they are doubtful about whether we politicians have the answers. I take this very seriously. However, I’m not prepared to accept a situation in which debates about society are used to fuel xenophobia and racism. That’s why I have proposed a strategy to counteract the threat of division in our community. This includes specific projects in the area of law and order, as well as public meetings during which ordinary people and politicians can discuss these matters on an equal footing.

Can the damage to Dresden’s image be undone any time soon?
Hilbert: Not from one day to the next. However, we will be working on issues that other German cities may not get round to addressing openly for months or even years. If we get this open dialogue to work for us, it will make our city more socially cohesive.
Klepsch: The current situation in Dresden has also shown us where we still have a communication deficit. We should not simply try to paper over the cracks in our image but instead give an honest response. As regards social cohesiveness, we need a public debate about the sort of society we want to live in. We have to listen to other opinions, however uncomfortable they might be. At the same time, the generally accepted norms of social behaviour should be observed and adhered to. Nobody should have to put up with being shouted down or insulted under the pretext of freedom of expression. The many arts and cultural institutions of the city can make a useful contribution to this debate.
Hilbert: We are deliberately linking this civic dialogue to issues such as our application to be the European Capital of Culture in 2025 and the national Zukunftsstadt (City of the Future) competition.

The upheavals and fractures that affect the whole continent are especially evident in Dresden.

What does the application for European Capital of Culture involve?
Klepsch: There are three strands to this process. Firstly, it’s about establishing a new identity, a new cohesion for the city as a social entity. Secondly, we see it as an opportunity to open up a debate on the future of Europe, because the upheavals and fractures that
affect the whole continent are especially evident in Dresden. Thirdly, we are focusing on the cross-disciplinary aspects – Dresden as a city of art and science, art and innovation, art and culture.

What does the Zukunftsstadt project include?
Hilbert: In 2015, the Federal Ministry of Education and Research invited all German cities and regions to enter its Zukunftsstadt competition. They were asked to pool the resources of their various research facilities and come up with an overall vision for urban development towards the year 2030, with particular regard to the issues of mobility, town planning, the environment and accessibility. Dresden has made it through to the second round.

We are deliberately linking this civic dialogue to issues such as our application to be the European Capital of Culture in 2025 and the national Zukunftsstadt (City of the Future) competition.

How do you get Dresdeners involved in these two projects?
Klepsch: We started our European Capital of Culture application last year by seeking a dialogue with ‘multipliers’ operating in the cultural, scientific, tourism and sporting spheres. Until the end of this year, we’ll be setting up our yellow marquee in different parts of Dresden and talking to local people about our Capital of Culture application. We will then be able to evaluate the results of a campaign in which we asked people to tell us online or on a postcard what the word ‘culture’ means to them and what the strengths and weaknesses of Dresden are. The answers will help us to put together the application book, which we will be submitting in late 2018.

Born 1977 in Dresden, studied Sociology, Theatrical & Cultural Sciences in Leipzig and Vienna. Worked as an editor, dramaturg and project leader in the youth welfare service. Elected to both the parliament of the Free State of Saxony and to Dresden City Council in 2009 as a member of the political party Die Linke. Since 2015, Dresden’s Deputy Mayor has sat on the Culture and Tourism Committee.

Born 1971 in Dresden, he studied Industrial Engineering at TU Dresden and then worked in Cologne and Berlin. Served on the Commerce and Industry Committee of Dresden City Council since 2001 and was made First Mayor of Dresden in 2008. He was provisional Oberbürgermeister before being appointed to the office in 2015.