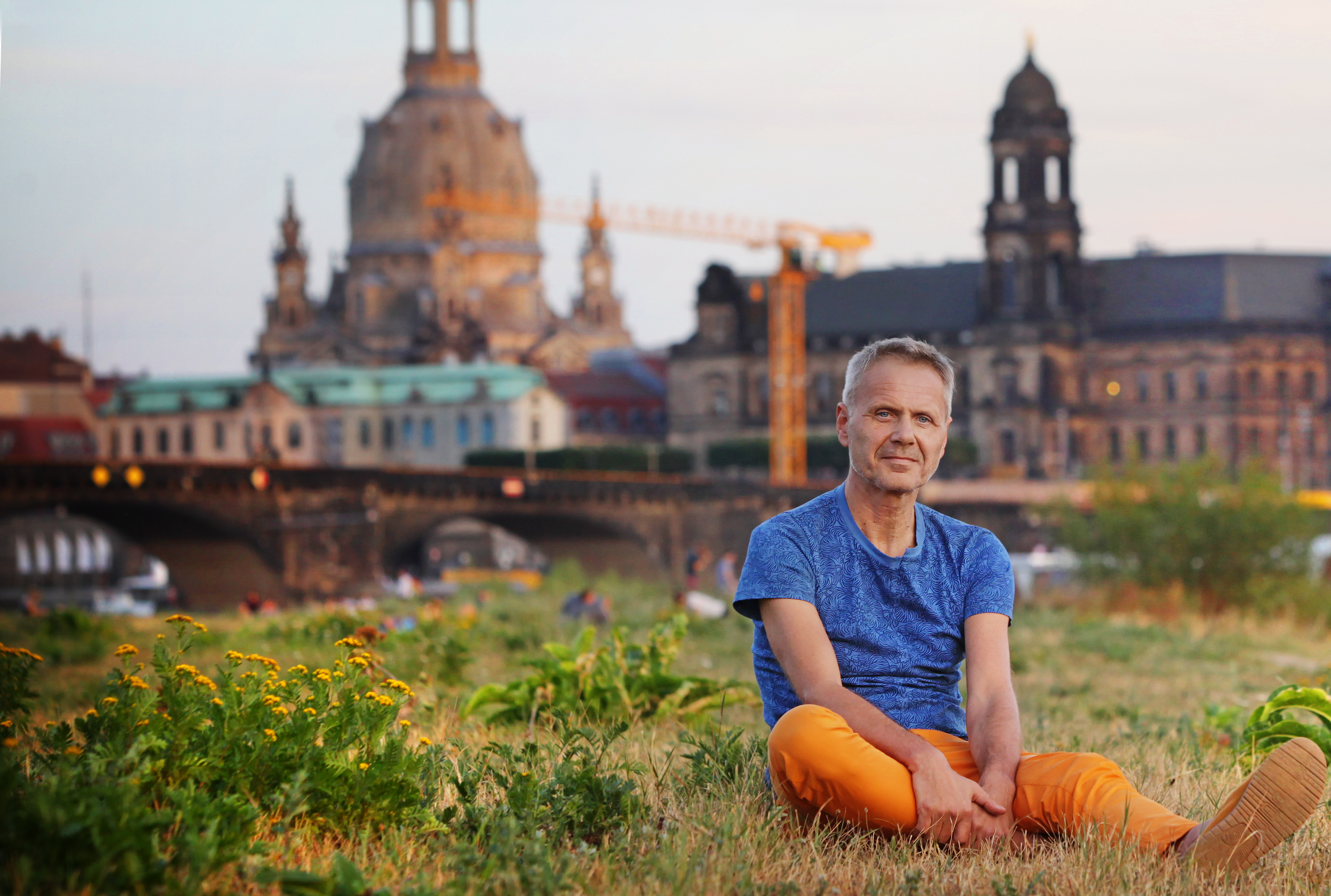 Dresden aspires to become Capital of Culture 2025. The author and cultural consultant Michael Schindhelm is curating the application. We asked him about Dresden’s special place in Europe

What makes Dresden so special in your eyes?

There are certain places that always act as a magnet for creativity, places that have a special DNA. Dresden is one such city. In the early Baroque period, Dresden produced the composer Heinrich Schütz, who created some of the most acclaimed music of his time. Dresden was a hub of early romanticism, it was a focal point in the revolutionary fervour that swept through Germany in 1848, and it was where the artistic movement known as Die Brücke was founded in the modern era. e city has been at the fore- front of social and cultural experiments in di erent epochs.

You grew up in the GDR and knew Dresden as a child. More recently, though, you have spent many years living abroad. Since May 2018, you have been a regular visitor to Dresden. Has the city changed?

The surprising thing about Dresden is its unique blend of modern affluence and GDR legacy. I’ve lived in mega-rich cities such as Monte Carlo, but a ride in a Tesla taxi was really something new for me – I had to return to Dresden for that experience. So on the one hand, you have the feeling that the city has become very prosperous, but on the other hand, you sense the presence of the former city with its GDR heritage – much more so than, say, in Leipzig or Berlin.

There was a Dresden in Brooklyn and one in Manhattan. So that was the term used for when the situation reached rock bottom.

What most people first think of in connection with Dresden is the Zwinger and perhaps the Frauenkirche church.

Interestingly enough, you get completely different associations when you are abroad. In the USA, I’ve heard many stories about New York in the 1980s. At that time, it was known as ‘Fear City’. In some districts, total chaos prevailed; whole blocks were burned out, and they were called ‘Dresden’. There was a Dresden in Brooklyn and one in Manhattan. So that was the term used for when the situation reached rock bottom. Ironically, that too is a unique selling proposition that must not be forgotten when addressing an international audience.

One of your last major projects was the construction of an opera house in Dubai. Doesn’t ‘bourgeois’ Dresden seem a bit boring after that?

In Dubai, development was taking place at an insane pace – at least until the financial crisis. But when I was living there, one thing in particular struck me, namely that the frantic rate of change that Dubai was undergoing is basically the same that we are experiencing in Central Europe. Dresden may seem at first glance a tranquil sort of place, with its idyllic baroque skyline and the gently flowing river – almost provincial, you might say. But when you get to know the people, you find that there is a great deal going on below the surface. That’s why it’s so exciting for me to be working here right now.

The citizens of Dresden are supposed to have an input to the application process. How are you going about this right now?

I have conversations with as many different people as possible to get as diverse a picture as I can of how the locals see themselves.

And what are they thinking?

Opinions are divided. There are those who welcome change, and then there are those who reject it. The latter see German unity as a failure, feel deceived, left behind and excluded from the political process. There are sections of the community that increasingly take an antagonistic stance.

Are you talking about immigration here?

It is only superficially about immigration and PEGIDA. The real question is, how much globalisation and how much innovation can we take. My impression of Germany as a whole is that everyone currently feels some degree of alarm, because globalisation is obviously bringing about tremendous changes. These manifest themselves in the form of technology, urbanisation, immigration – and they all seem unstoppable. In Dresden, this conflict is taking place at an especially voluble level.

Almost everywhere, you feel this rift running through society, and everywhere it has the same causes.

Why then should Dresden still be European Capital of Culture?

Paradoxically, it is precisely this conflict that makes Dresden so archetypically European. I also live in London, where I’ve experienced the time before and after Brexit – the news images of PEGIDA and the Vote Leave movement are virtually interchangeable. I lived in Italy under Berlusconi, spent a few years in France when Jean-Marie Le Pen was on the up and up, and I worked in Holland and Switzerland. Almost everywhere, you feel this rift running through society, and everywhere it has the same causes. I believe that a Capital of Culture must be able to represent the continent as it is today; only then does it deserve the title of European Capital of Culture.

What is the role of culture in such a situation?

Culture is an instrument for shining a light on differences so that they become visible and comprehensible. Through the medium of culture, we can tell each other about ourselves – and at the same time find ways to overcome these differences.

So, culture as a sort of therapy?

It is at least capable of triggering an important maturation process. We were in a similar situation during the demise of the GDR. At that time, everyone was talking about unification and trying to eliminate the differences between the two halves of Germany as quickly as possible. Yet it wasn’t that simple: we were coming from a different starting point; we had experienced different things and had different stories to tell. Of course, recognising differences and showing tolerance is diffcult, but in my opinion, we missed a chance then.

Agreed, but in the sense of a division of labour: some write about their experience in the East while “Generation Golf” do their own thing – but basically both are speaking only to their own audience. is was more introspection than dialogue; ultimately, the two groups did not become any closer.

Dresden is a city that is not only renowned for culture but also for being at the cutting edge of technology. How does this affect your perspective of the city?

This combination of history and ultramodern technology is, in my opinion, the distinguishing feature of the European city, not only of Dresden. We need a concept of culture that extends to technology. In Dresden, we have good conditions for this, because there are so many research institutes that are working on the technologies of the future. But that must not be something that scientists do in their labs without the city being aware of it. The job of culture is to connect city and technology.

And how does that work?

You can only convince people of the benefits that accrue from innovation by showing them that it helps them to solve problems that would otherwise be insoluble. Participation politics, grassroots democracy – the scope for all of this has been enhanced by modern technology. ‘Occupy Wall Street’ and later grassroots movements also sprang from the concept of digitisation.

Of course, every invention has the potential for both good and evil. As I see it, the most important argument to be levelled against the critics of technology is that, because populists tend to exploit innovation for their purposes, it gives us every reason to use the same innovation in a different, open way. These advances are coming about anyway, so simply saying no won’t stop them happening. And your rationale risks being misunderstood.

If Dresden’s application is successful, it will become Capital of Culture in 2025. What do you expect to be of special importance in that year?

By 2025, half the population of Dresden will be under 45. This means that they will only know the Cold War from a childhood perspective or from listening to accounts from older people. At the same time, these people will be ‘digital natives’. That means you can’t just leave the job of drawing up the programme for 2025 to someone like me. Instead, I need to be asking today’s 16 year olds to imagine the future and to tell me what they would like to do. If I don’t listen to that, I am doomed to fail.

Michael Schindhelm was born in 1960 in Eisenach. As a student of Chemistry, he spent several years in Russia. He worked as a translator, author and dramaturge; was director of the theatres in Gera and Basel and director general of the Berlin Opera Foundation. In 2007, Schindhelm went to Dubai as a manager of cultural projects. His documentary film, The Chinese Lives of Uli Sigg, was recently released, and he has also had his book Walter Spies: Ein exotisches Leben (Walter Spies: An exotic life) published.