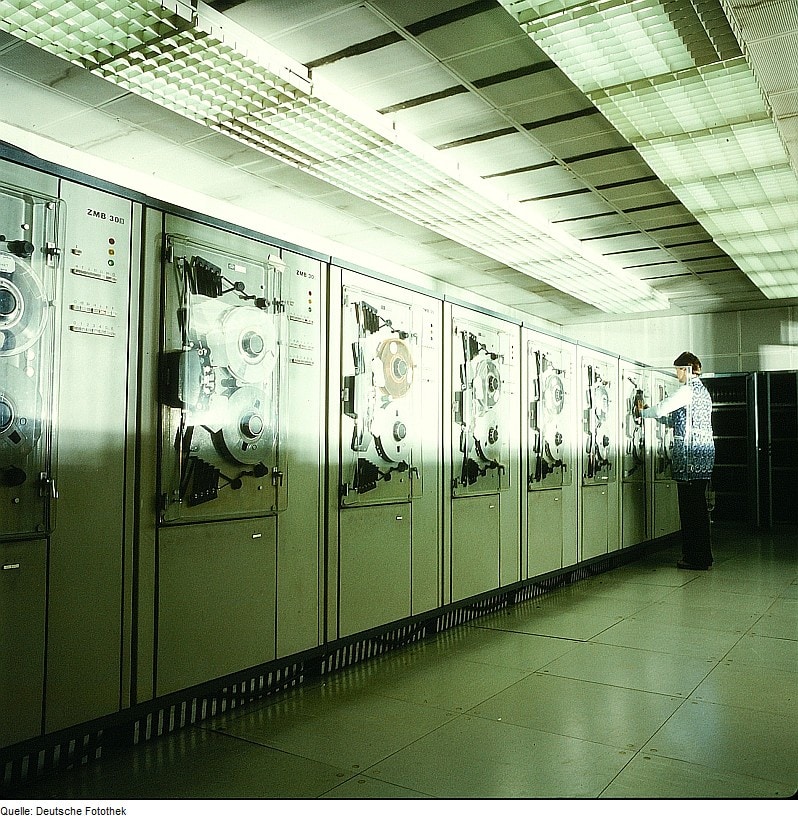 A key year in the history of technology in Dresden: In 1969 the state-owned Robotron enterprise was set up and TU Dresden admitted the first intake of students for its pioneering IT degree course. A significant anniversary that is worthy of celebration.

The price for a Robotron 300 was set at three million East German marks – a massive amount for a massive machine. This mainframe computer was put to use in industrial environments and at universities. It weighed in at six tonnes and was able to process 300 punch cards per minute – hence the number in the name. At that time, technology that is now used only for factory workers clocking on and off was standard: complex computer programs punched into cards.

The computer required its own purpose-built premises and was manned by a team of eight operatives per shift, with anything up to 18 more working on data input. Around 350 of these supercomputers were delivered; communism’s answer to IBM, the technology giant of the West, was quite successful in its own terms.

The Robotron 300 was first unveiled in 1966. Three years later, in 1969, it gave its name to an even bigger project, namely the founding of VEB Kombinat Robotron. Up to 70,000 people in Saxony worked for the GDR’s largest computer manufacturer at one time or another.

The founding of Robotron was a milestone in the history of technology in East Germany. 1969 was in any case an important year for Dresden’s development as a hub for IT expertise: it was the year in which the Technical University opened its ‘Sektion Informationsverarbeitung’ (Information Technology faculty). The first students enrolled for the winter semester. Apart from Dresden, the only other German universities offering the subject were Karlsruhe, Munich, Darmstadt and Saarbrücken, all in the West.

Exhibitions to commemorate the double anniversary

FUTUR ZWEI is the title given to a programme of events organised by Technische Sammlungen Dresden (Dresden Technical Collections). A special exhibition running until 7th July marks the double anniversary of the TU Information Technology faculty and the state-owned enterprise. The star exhibit is obviously the mainframe Robotron 300, but also on display is the Z 9001, the first GDR-manufactured home computer.

Although Robotron as a computer manufacturer may be history, the name lives on in Robotron, a software company specialising in the creation of databases and the analysis and management of ‘big data’. The company has set up a small museum at its headquarters. Its collection of old computers is a reminder of the Saxon capital’s hi-tech history. On special occasions, it is open to the public, for example 6th July (Museum Night Dresden) and 17th June (anniversary of the 1953 uprising in East Germany).

Celebrations at the Technical University

The Information Technology faculty of TU Dresden is organising a festival week to coincide with the 17th June anniversary.

But the purpose is not to present a romanticised view of the past. After all, GDR technology was in a parlous condition. Although the other countries in the Warsaw Pact regarded East German computers as reliable, state enterprises such as Robotron trailed far behind western competitors with their advanced technology.

The situation today could not be more different: Dresden is now a hub of hi-tech with an international reputation. Start-ups and large corporations are drawn to ‘Silicon Saxony’. Any research project into 5G and AI (Artificial Intelligence) will inevitably have a link to Saxony’s state capital.

At TU, they look confidently to the future. On 19th June, Germany’s longest-established IT institutes will be showcasing their current projects via a livestream broadcast. Under discussion will be topics that are set to become increasingly important in the future: None of Our Business ¯ \ _ (ツ) _ / ¯ About the Responsibility of Information Technology is the name of a forum at which the ethical issues of data processing will come under the spotlight. After all, this is not something that can simply be shrugged off: with increasing scope for surveillance, data manipulation and military applications, the IT scene is in need of critical self-awareness.

On the programme for 20th June is ‘Output.DD’, the focus of which will be on reforms of the faculty aimed at preparing it for the future and on the issue of how to link digitisation to sustainability. Joining the specialists from the TU will be representatives of companies based in the region. They will be presenting projects ranging across such diverse fields as advances in data visualisation, developments in touch screen display, esports, data visualisation systems and new VR (virtual reality) applications.

Artificial intelligence will also be high on the agenda, as exemplified by the humanoid service robot Pepper which is deployed at the Department of Adaptive Dynamic Systems.

One of the many questions preoccupying researchers at TU is how a machine can be taught to develop empathy for human emotions. The friendly smile of this robot makes it very clear that the era of the punch card is long gone.